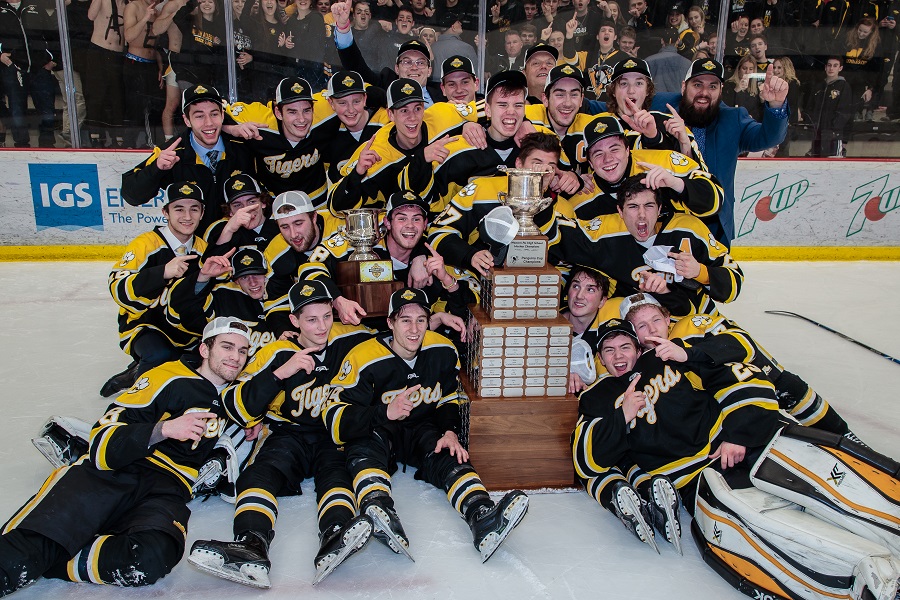 The North Allegheny ice hockey team captured its third Penguins Cup title on Tuesday night with a 3-0 shutout over the Peters Township Indians at the UPMC Lemieux Sports Center. The contest pitted the highest scoring offense in Class AAA against the stingiest defense in the classification. The old adage that defense wins championships held true as senior goalie Richie Karapandi and the NA defense earned their fourth shutout of the season and first of the playoffs. Karapandi stopped all 23 shots he faced.

While the game was scoreless through one period of play, both teams were able to display their skilled skating and blazing speed in the opening stanza. Karapandi and Peters Township net minder Alex Wilbert matched each other save for save in the first period, but a costly turnover by the Indians set up the game’s first goal early in the second.

Just 37 seconds into the second period, junior Will Parreaguirre pounced on a Peters Township turnover and fed a pass to Aaron Miller for a 2-on-0 breakaway. Miller kept the puck and burned Wilbert on a backhand deke for a 1-0 North Allegheny lead. Following the NA goal, the Indians turned up the intensity on offense with nine shots on net and numerous scoring chances. However, all nine shots were turned away by Karapandi as the Tigers maintained their 1-0 lead going into intermission.

At the start of the third period, North Allegheny stormed out of the gates and twice hit the post on shot attempts, coming an eyelash away from expanding the lead. At the 5:42 mark of the period, the Tigers did finally break through for some insurance when Justin Symons steered a wrist shot from the top right point that was redirected in front by Parreaguirre for a 2-0 advantage.

Late in the period, Miller put the game away with his second goal of the game, and fourth of the playoffs, with an empty-net tally to finish off a 3-0 Penguins Cup victory for the Tigers. For his play, Miller was named the Wright Automotive Player of the Game.

With the win, North Allegheny advances to the Pennsylvania Cup championship on Saturday to face the LaSalle College Explorers at 4 p.m. at the RMU Island Sports Center. The game will be broadcast live via the internet by the North Allegheny Sports Network.