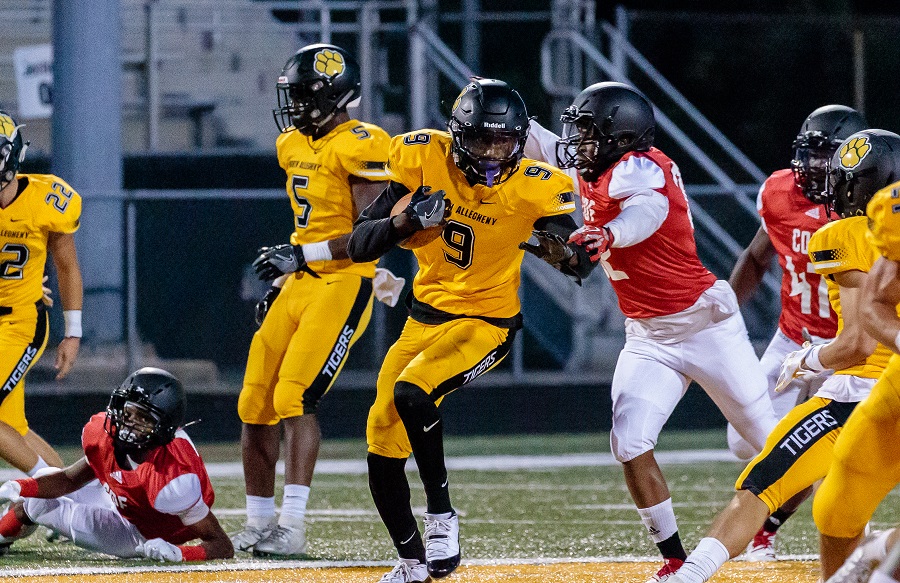 North Allegheny (1-0) came alive in the second half, outscoring COF Academy (0-1) 27-8 en route to a 45-20 win in the Tigers’ Week Zero matchup. This is COF Academy’s first season as a football team and was the first game in the school’s history.

The first quarter was a defensive slugfest with North Allegheny getting the only points of the quarter on a Ben Maenza 4-yard run. COF Academy jumped offsides on the extra point attempt so NA head coach Art Walker elected to go for two and quarterback Ben Petschke ran it in and the Tigers were up 8-0.

The Tiger offense then started to wake up scoring 10 unanswered points to end the half. The first seven came on a Maenza 3-yard run and then Isaac West booted a 39-yard field goal from the right hash to give North Allegheny an 18-12 lead at the half.

The second half was all North Allegheny as they scored four straight touchdowns. The first was a 14-yard hookup on a slant from Petschke to Joey Porter Jr.  Maenza followed with his third touchdown from 6-yards out. Gunnar Fisher and Kenny Williams also added touchdown runs for the Tigers and the rout was on as NA led 45-12.

COF Academy put the ball into the end zone one more time and North Allegheny was able to take their week zero matchup, 45-20.

Finishing with 23 carries for 137 yards and three touchdowns, Maenza was named the Wright Automotive Player of the Game.