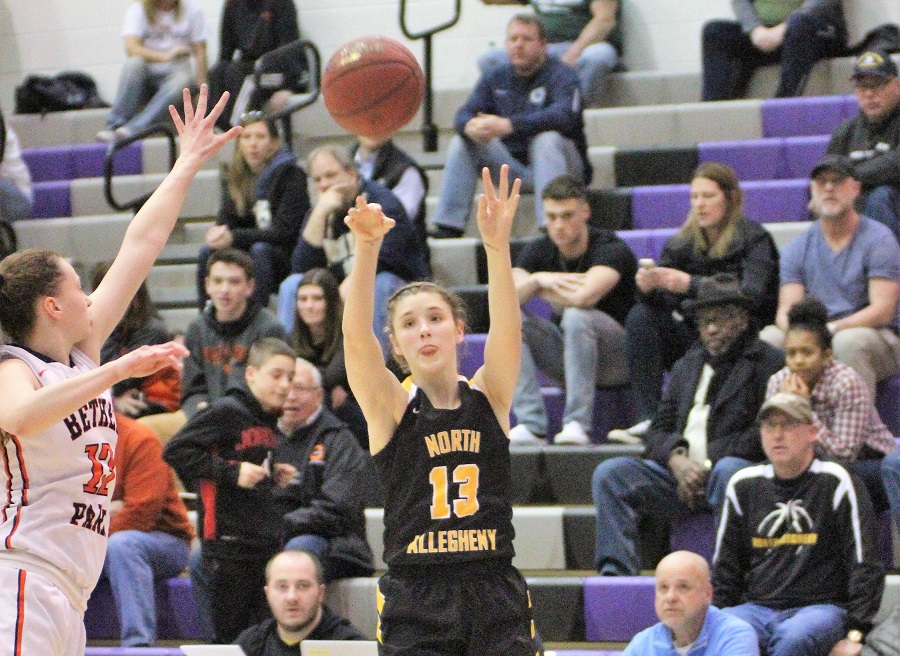 In a rematch of last year’s WPIAL championship game, the North Allegheny Tigers again prevailed over the Bethel Park Black Hawks with a 44-34 victory in the PIAA quarterfinals on Friday night at Baldwin High School. The Tigers punched their ticket to the state’s final four for the third straight year and matched the program record for most wins in a single season at 28. The win was the fourth in a row in the head-to-head series with Bethel Park with three of those victories coming in the postseason.

The Lady Tigers stormed out of the gates in the first quarter and opened the game on an 8-0 run. NA perimeter shooters had the hot hand in the early going and poured in five 3-pointers in the first half to hold a 30-20 lead by halftime. Junior guard Brynn Serbin helped lead the first-half surge with a pair of treys on her way to a nine-point night.

Tenacious defense has always been a trademark of Jonna Burke’s Bethel Park teams and the Black Hawks turned up the heat on the Tigers in the third quarter. The Black Hawks limited the Tigers to 18-percent shooting in the second half and held NA scoreless for almost the entire quarter before Serbin hit her third 3-pointer of the game prior to the third quarter buzzer.

North Allegheny held a 33-26 advantage after three quarters but the game got tighter when Carlow University recruit Kamryn Lach hit a 3-pointer, her third of the game, to trim the NA lead to 35-32 with 4:52 left in the fourth quarter.

With Bethel Park riding a wave of momentum, the Tigers answered the call on a layup by Madelyn Fischer to extend the lead to 37-32 with four minutes to play. North Allegheny slowed down the pace in in the remaining minutes before senior Courtney Roman broke the backs of the Black Hawks with a 3-pointer with 1:40 on the fourth quarter clock for a 40-32 lead. Roman totaled a game-high 11 points and connected on 3 of 6 attempts from beyond the arc for Wright Automotive Player of the Game honors.

From that point on, the Tigers put the game on ice at the free throw line. Freshman Lizzy Groetsch, who delivered crucial free throws in the previous win over Altoona in the PIAA second round, went 4 for 4 at the charity stripe down the stretch to advance the Tigers to the final four with a 44-34 victory. Groetsch finished the night with 10 points on 10 of 10 shooting from the free-throw line.

North Allegheny improves to 28-0 on the season and advances to the PIAA semifinals on Monday night to face the runners-up from District 1, Central Bucks South. The game will be broadcast live via the internet by the North Allegheny Sports Network. Bethel Park’s season comes to an end with a 19-7 record.