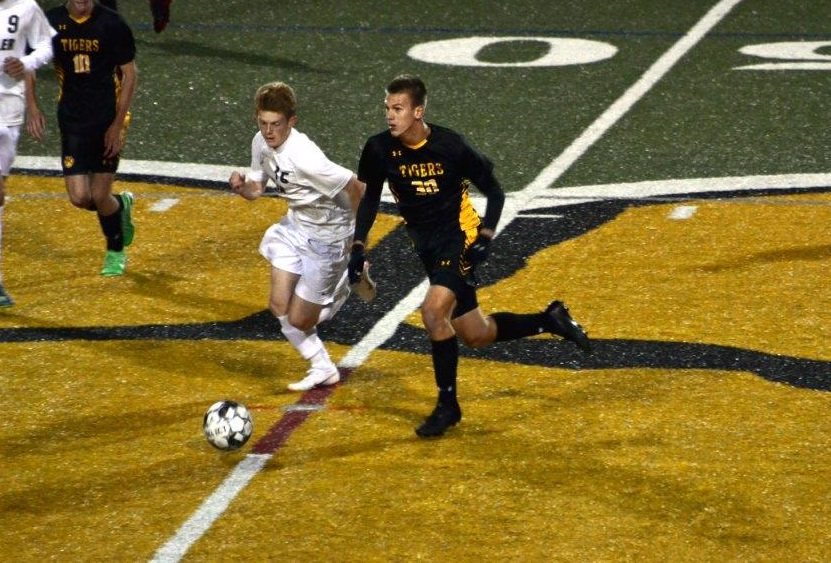 The two-year reign of the North Allegheny boys’ soccer team came to an end as the seventh-seeded Peters Township Indians edged the 10th-seeded Tigers, 1-0, in the opening round of the WPIAL playoffs. Monday’s game marked the third straight year the Tigers and Indians have met in postseason play. Last season, North Allegheny rallied to beat Peters Township, 2-1, in the WPIAL Championship Game.

The Indians scored the only goal of the night on a marker by senior Christian Verner within the first seven minutes of game. The Tigers spent the remainder of the evening threatening the PT net with a furious rally. North Allegheny’s best scoring chance in the first half came with 10:00 minutes remaining on a header attempt from senior Drew Hunker that required a diving save by PT goalie Jackson Basar.

Play in the second half was a bit choppy with Peters Township sitting back on defense. NA’s leading scorer, Will Cinker, dribbled in for a shot with 20:00 on the clock but his left-footed try from 20-yards out missed wide left. The Indians had a golden opportunity to put the game away when the Tigers were called for a hand ball in the goal box with 13:23 left in regulation. However, senior Brian Bruzdewicz missed wide right with his penalty kick opportunity and the score remained, 1-0.

With some extra momentum following the failed penalty kick, North Allegheny nearly found the equalizer with 8:38 remaining on a line-drive shot by Luke Anderson from 10-yards out. Basar made the clutch save and didn’t allow a rebound to deny NA’s final quality scoring chance on the night. Peters Township survived for a 1-0 win in the WPIAL first round.

Peters Township improves to 11-7 on the season and advances to play second-seeded Norwin on Thursday night. North Allegheny’s campaign ends with a 10-6-1 record and a ninth straight appearance in the WPIAL playoffs. Congratulations to head coach Bobby Vosmaer and the Tigers for a terrific season and two-year run as WPIAL champions.