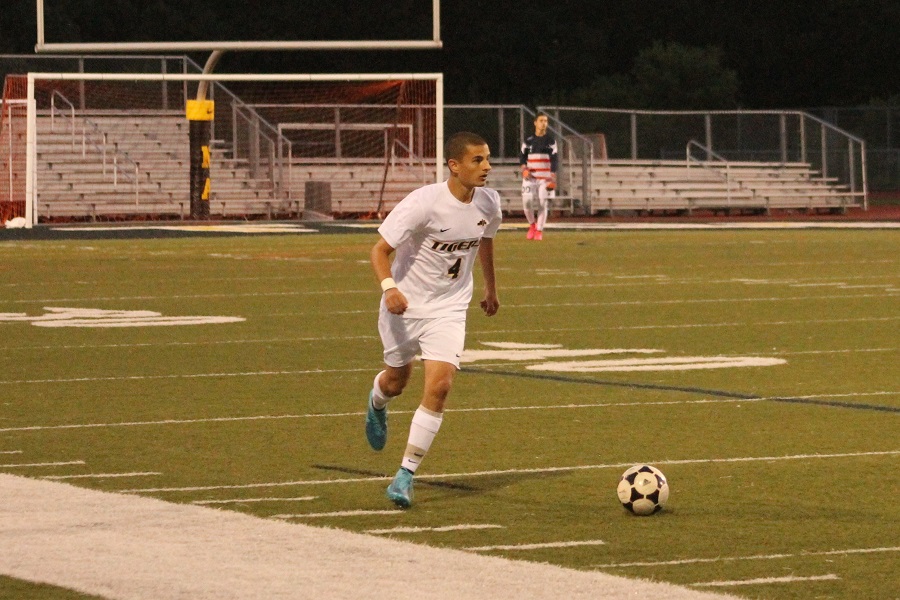 NA Boys’ Soccer Rallies From Behind To Tie Shaler, 2-2

North Allegheny rallied from a 2-0 deficit in the second half and played Shaler to a 2-2 draw on Tuesday night at Newman Stadium. The tie extended the Tigers unbeaten streak to five consecutive games.

Last season, Shaler went 1-9-2 in Section 2-AAA. However, the Titans only section win was a 3-1 upset of the Tigers at Newman Stadium. Winless in section play through four games this season, Shaler appeared poised to stun North Allegheny yet again.

After a scoreless first half, the Titans scored the game’s first goal when a controversial penalty kick was awarded to the visitors with 35:33 on the second half clock. On the play, NA goalie Grant Glorioso was issued a yellow card and was forced to watch Duquesne University recruit Ryan Landry push the penalty kick past freshman goalie Devon Angermeier to give the Titans a 1-0 lead. Less than seven minutes later, Landry scored again on a header off a corner kick to bring the score to 2-0, Shaler.

Midway through the second half, Shaler nearly put the game away when junior Pat Bove’s shot struck the right post and caromed away, keeping the score at 2-0. The near miss served as a wake call for North Allegheny as the Tigers put forth relentless pressure that eventually paid off with a little over ten minutes to play. Trying to mount some offense, senior Michael Correa was tripped up in the box by Shaler’s Jake Taylor to give the Tigers a penalty kick opportunity. Senior defenseman Nick Thornton took the PK and delivered a goal for North Allegheny to cut the deficit to 2-1.

With just 7:57 left in regulation, sophomore Josh Luchini netted the game tying goal to even the score at 2-2 and force overtime. In the first overtime, it appeared that Luchini might also score the game winning marker but with 20 seconds remaining Shaler goalie Matt Potock made a great diving save to deny the Tigers and force a second overtime. In the waning seconds of double OT it was North Allegheny’s Glorioso who made a game preserving save with 10 seconds remaining to thwart a header by Shaler junior Michael Bagwell. The contest ended in a 2-2 tie.

Bagwell had a big game defensively for Shaler, while Correa covered every inch of the field for North Allegheny. Providing endless energy and also drawing a penalty that led to Thornton’s momentum turning penalty kick goal, the North Allegheny Sports Network selected Michael Correa as the Wright Automotive Player of the Game.

North Allegheny’s record sits at 4-1-2 overall and 2-1-2 in Section 2-AAA. Shaler is 1-5-1 overall and 0-4-1 in section play. The Tigers will try to keep their unbeaten streak alive on Thursday night with a visit to North Hills to face the second place Indians.