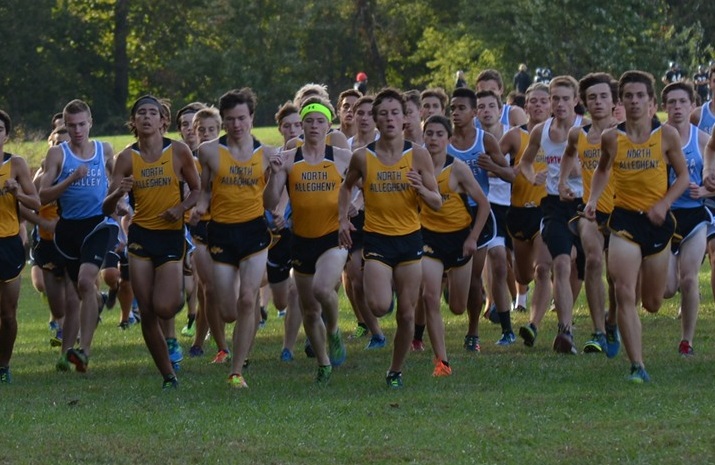 The North Allegheny boys’ cross country team won its 11th straight WPIAL Class AAA championship on Thursday afternoon at Cooper’s Lake Campground with a low score of 39 points. Seneca Valley was a distant second with a score of 80. Not to be outdone, the Lady Tigers cross country runners earned WPIAL silver with a second place finish and team score of 120. The Seneca Valley girls’ team won its second consecutive WPIAL crown with a score of 68 points.

Leading the way individually for the NA boys was Marc Migliozzi who turned in a second place time of 16:15, finishing narrowly behind individual champion Nick Wolk of Peters Townshup who turned in a time of 16:12. Grabbing fifth place was NA’s Jacob Stupak (16:31), finishing seventh was Sam Blechman (16:41), taking 12th place was Zack Deible (16:59), and earning a 13th place showing was Jacob Greco (16:59).

For the Lady Tigers, Clara Savchik won bronze with a time of 19:26. The WPIAL individual champion was Lauren Finikiotis of Oakland Catholic who clocked in at 19:06. No other NA runners finished in the top 15.

Up next for the North Allegheny cross country team will be the PIAA championships on Saturday, November 7.