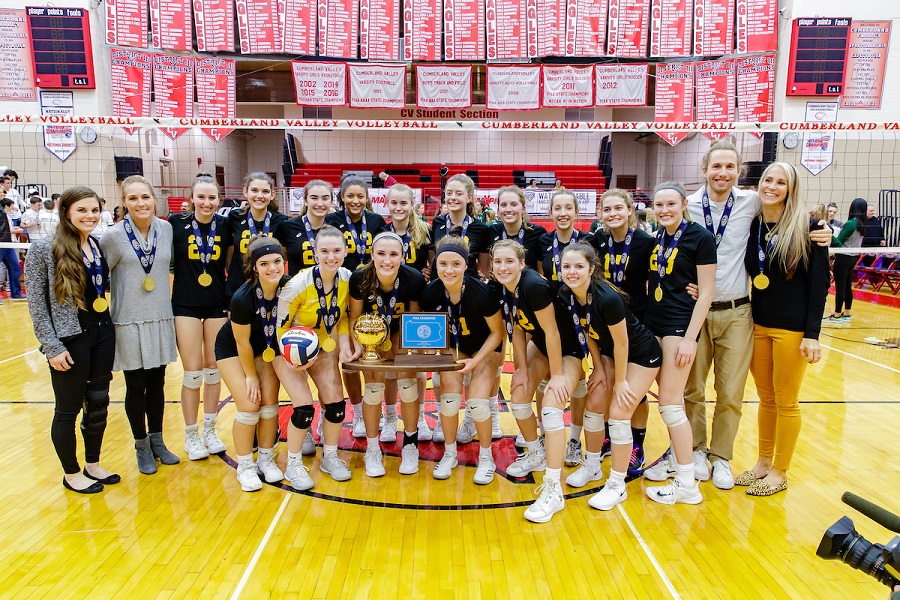 The PIAA Class AAAA girls’ volleyball championship was a rematch of the title tilt from last season. The result of the 2018 title matchup was identical to a year ago as the reigning state champion North Allegheny Tigers swept Bishop Shanahan again, 3-0. The Tigers rolled the District 1 champions for their fifth PIAA crown by set scores of 25-15, 25-23 and 25-20.

The tone was set early on as North Allegheny stormed out of the gates for a 10-2 lead in the opening set. With a balanced attack, the Tigers shredded the Eagles with six different players tallying kills. Following a strong performance in the PIAA semifinals against Garnet Valley, junior Hannah Phillips had another solid night and posted three kills in the first set to help NA to a 25-15 win.

In a battle of unbeaten teams, Bishop Shanahan finally settled into the match in the second set and held an 18-16 lead late. The Eagles, who won the District 1 title for the fourth straight season, were powered by Yale recruit Cara Schultz, Sacred Heart commit Michaela Devlin and senior Julie Salvadore. All three players tallied four kills in the set. North Allegheny rallied on the strength of senior Anna Sprys, who posted three kills and two blocks to propel the Tigers to a 25-23 victory. Sprys finished with a team-high 10 kills on the night.

In the third set, Bishop Shanahan led 12-11 before North Allegheny took command by scoring six of the next seven points for a 17-13 advantage. The Tigers maintained the lead the rest of the way en route to a 25-20 triumph. Sophomore setter and Louisville recruit Paige Morningstar facilitated the Tigers balanced attack and contributed to a terrific defensive effort with 10 digs. For her play, Morningstar was selected as the Wright Automotive Player of the Game by the North Allegheny Sports Network.

Along with Morningstar the Tigers defense played a key role in the victory. Senior libero Allena Carmody led with 15 digs, followed by Paige and Abby Miller with 13 and 12 digs, respectively. Facing the powerful swings and serves from the Bishop Shanahan hitters, the NA defensive specialists withstood the barrage and grounded the Eagles.

North Allegheny concludes the 2018 season with a perfect 23-0 record and will carry a winning streak of 47 in a row into next season. Bishop Shanahan finishes as the state runner-up for the second year in a row and caps the year with a 22-1 mark. Congratulations to head coach Heidi Miller, her coaching staff and the entire Lady Tiger team for another memorable season.