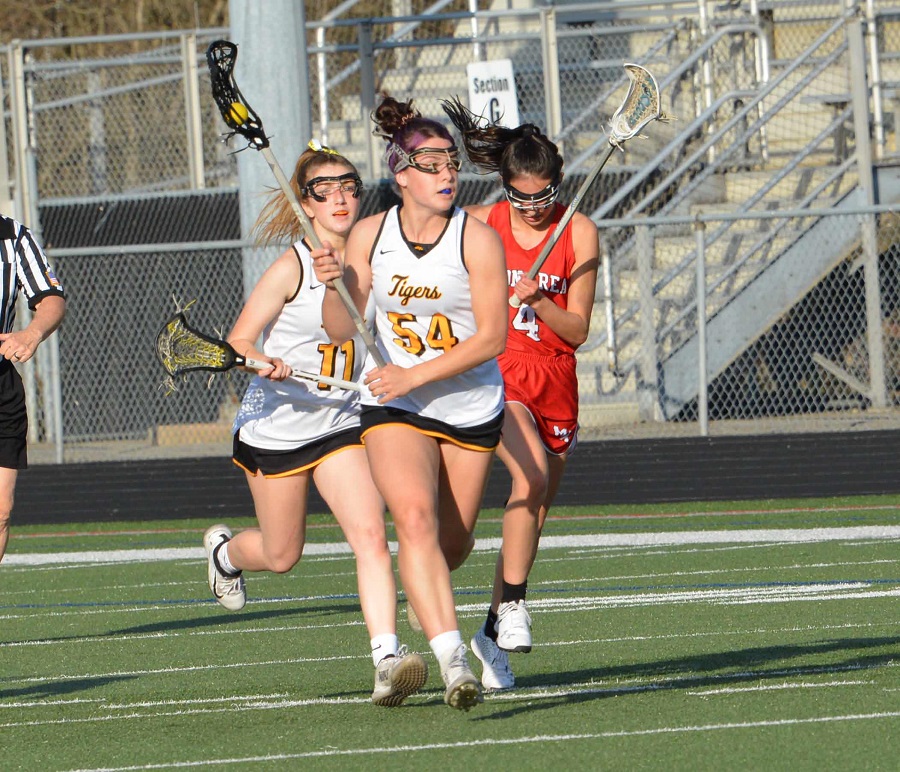 North Allegheny returned home for their third straight section match as they hosted Moon and the early season results remained the same as the Tigers won their fifth straight 22-6.

After Skye DePrado gave North Allegheny a 1-0 lead :09 into the contest, Moon’s Alajane Leeman and Seanna Rodriguez scored free position goals to put the visiting Tigers up 2-1. North Allegheny then exploded, netting the next six goals in a span of 1:01. Bella Falo and Katie Oates scored on free positions to put NA back in front. Lola Wilhite found the net twice, DePrado added her second and Wilhite completed the hat trick to give the Tigers a commanding 7-2 lead.

After Moon made the score 7-3, Oates scored her second and Mila Prusak added a pair for North Allegheny which would help the Tigers build a 16-4 halftime lead with the running clock.

On the night, DePrado and Wilhite each scored 5 goals and the pair now has 32 and 26 goals on the season respectively to lead North Allegheny. Falo added a hat trick, her fourth of the year and Oates also scored three times to up her season total to 11 goals. Prusak and Amelia Henderson each scored a pair of goals while Alyssa Redshaw and Emma Lafayette added single tallies for North Allegheny, which topped the 20-goal mark for the fourth consecutive match. Wilhite and Prusak each added three assists with DePrado and Makenna Tuman registering a pair of helpers of their own.

The senior Tuman also sparkled at the X for North Allegheny, winning 19 faceoffs to pace the Tigers, with many of those wins leading to quick scores on the night. For the effort in the circle and her two assists, Tuman was awarded the Wright Automotive Player of the Match.

The Tigers hit the road again for a section match against Butler on Friday before returning home to Newman Stadium next Tuesday to host the Shaler Titans.