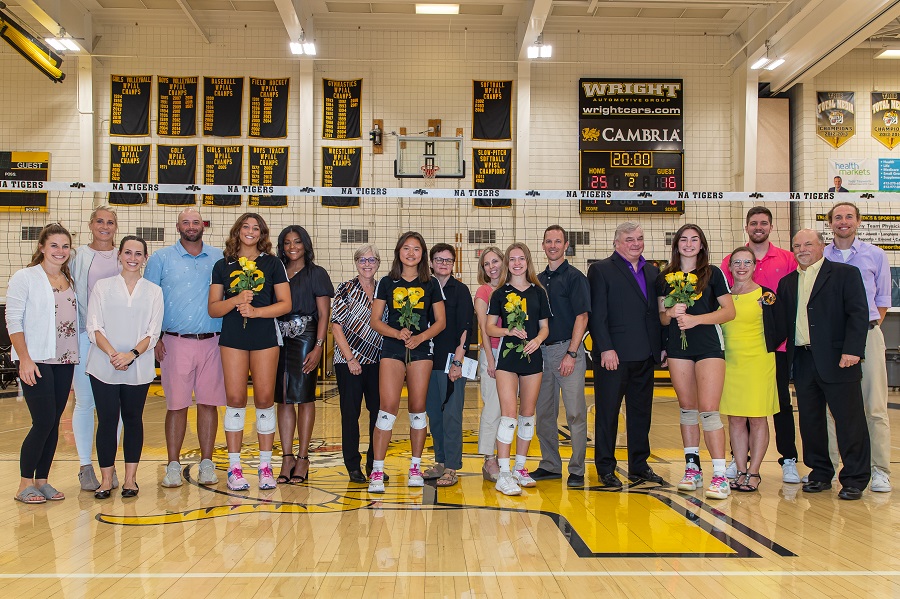 The four-time reigning PIAA Class AAAA champions flexed their muscles on Monday night with a 3-0 sweep over the sixth-ranked Oakland Catholic Eagles. Facing the first-place team in Section 3, the Tigers soared past the Eagles by set scores of 25-11, 25-19 and 25-23.

It was senior night at North Allegheny and all four seniors playing an important role in the opening-set win. Tied 6-6 in the early going, the Tigers pulled away by taking 10 of the next 12 points to gain command. Senior Chelsea Boyer notched a pair of aces in the set, while fellow senior Rachel Burton stuffed the net on her way to a team-high four on the night. The defense of seniors Abbey Hahn and Jadyn Perkins helped hold Oakland Catholic’s big hitters at bay as NA garnered a 25-11 win. Perkins finished with seven digs and added four kills on offense.

The second set followed a similar script to the first with NA trailing 5-4 in the early going before the Tigers went on a 6-0 run and eventually built a nine-point lead at 20-11. Despite Oakland Catholic’s best efforts to battle back, the Tigers prevailed, 25-19.

In the third set, the Eagles played their best game of the night and took a 9-3 lead against the Tigers. Senior outside hitters Liz Ford and Ava Barkich paced the OC attack with five and four kills, respectively, in the set. Overcoming the early six-point deficit, the Tigers rallied back with a variety of weapons that were facilitated by junior setter Mia Tuman. The Ohio State commit dished out 25 assists as the Tigers earned a come-from-behind win, 25-23. Tied 23-23, an Oakland Catholic hitting error and a Caroline Curran ace sealed the victory.

A consistent source of offense throughout the night in all three sets was sophomore Kyra Schmidt, who posted a team-leading eight kills on her way to Wright Automotive Player of the Game honors.

North Allegheny improves to 10-1 overall following the win, while Oakland Catholic falls to 9-2 on the season. The Tigers return to section play on Thursday night with a visit to North Hills to take on the Indians at 7:00 p.m.