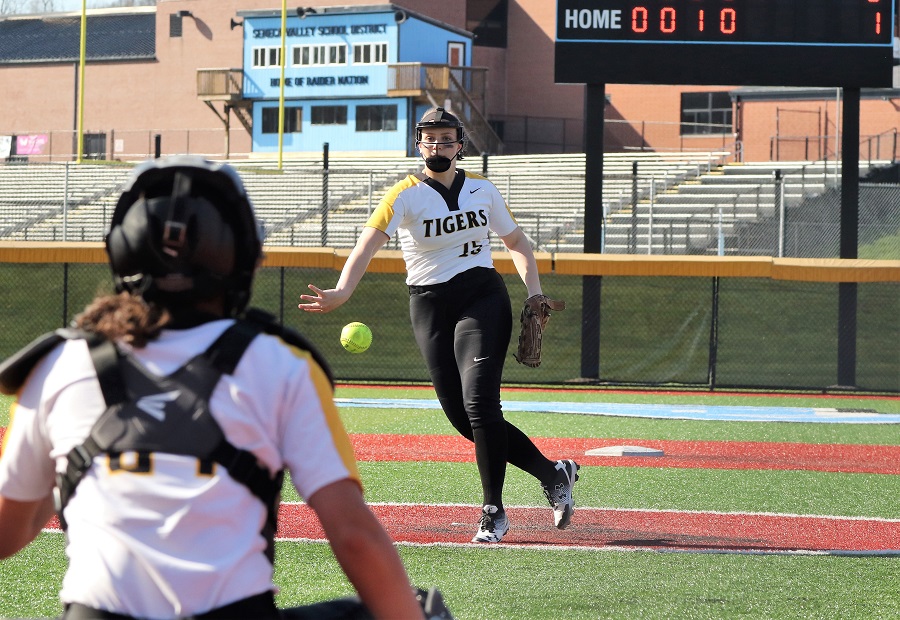 The North Allegheny softball team clinched an outright Section 3-6A title on Tuesday afternoon with a 6-1 win at Seneca Valley. Junior Ashley Adams tossed a complete game and drove in three runs to help propel the Tigers toward victory. In the pitcher’s circle, Adams scattered 11 hits and allowed only one unearned run with five strikeouts. For her efforts, Adams was named the Wright Automotive Player of the Game by the North Allegheny Sports Network.

The Tigers stormed out of the gates in the top of the first inning. With the bases loaded, Adams delivered a three-run double that scored Shannon Hamm, Dana Manz and Kristen Chomos for an immediate 3-0 lead. Freshman Chloe Szczepaniak followed with an RBI triple to plate courtesy runner Bella Janowiak for a 4-0 advantage.

Seneca Valley built a run-scoring threat in every inning but only cashed in once when a North Allegheny error allowed Mandy Magill to trot home in the bottom of the third inning and trim the Tigers lead to 4-1. The Raiders left 12 runners on base on the day.

Szczepaniak finished the afternoon with a 3-for-4 performance and two RBI’s, falling just a home run shy of the cycle. Chomos was 2-for-3 with a single, double, walk, RBI and a run scored.

With the win, North Allegheny not only locks up a section title but improves to 11-6 on the season and 8-1 in section play. Second-place Seneca Valley slides 9-5 overall and 6-3 in the section. The Tigers will visit Upper St. Clair on Wednesday in a non-section affair at 4:15 p.m.