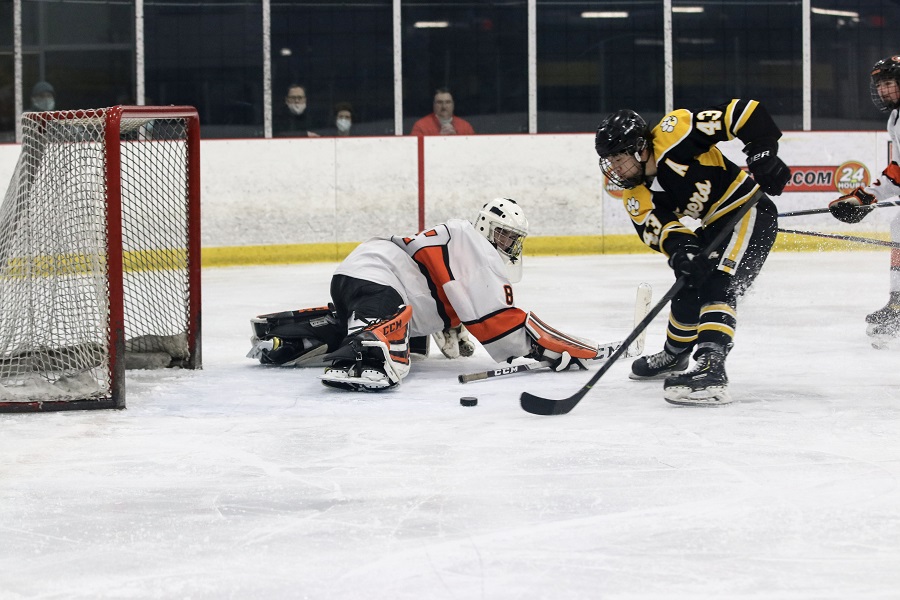 The North Allegheny ice hockey traveled to Erie on Tuesday night and came away with a 3-2 triumph over the Cathedral Prep Ramblers.

The contest began as a defensive struggle with neither team cracking the scoreboard in the first two periods. In the third period, the flood gates opened in a sudden scoring frenzy.

Only 41 seconds into the third, CP’s Matt Loza broke the ice to give the Ramblers a 1-0 lead. The lead was short-lived, however, as North Allegheny tied the score just 45 seconds later on a marker by Nolan Colinear, assisted by Cole Jackman.

Another quick burst of scoring came on back-to-back goals by Connor Chi and Trey Gallo midway through the third. At the 6:14 mark of the period, Chi scored on a beautiful breakaway goal to give the Tigers a 2-1 lead. Then at the 7:56 mark of the third, Chi fed a pass to Gallo for another NA goal and the Tigers held a 3-1 advantage. Loza scored his second goal of the game with 6:26 remaining in the game to trim the score to 3-2, North Allegheny. Despite the Loza goal, Cathedral Prep couldn’t find the equalizer in the remaining minutes and the Tigers held on for the one-goal victory.

In net, sophomore Rylan Murphy earned the victory for NA with 20 saves. CP goalie Cole Wisniewski stopped 17 of 20 shots in a losing effort.

North Allegheny jumps to 10-3-1 on the season, while Cathedral Prep falls to 5-11-0. The fourth-place Tigers will take on first-place Canon-McMillan on Thursday night at 9:10 p.m. The game will be video streamed live by the North Allegheny Sports Network.