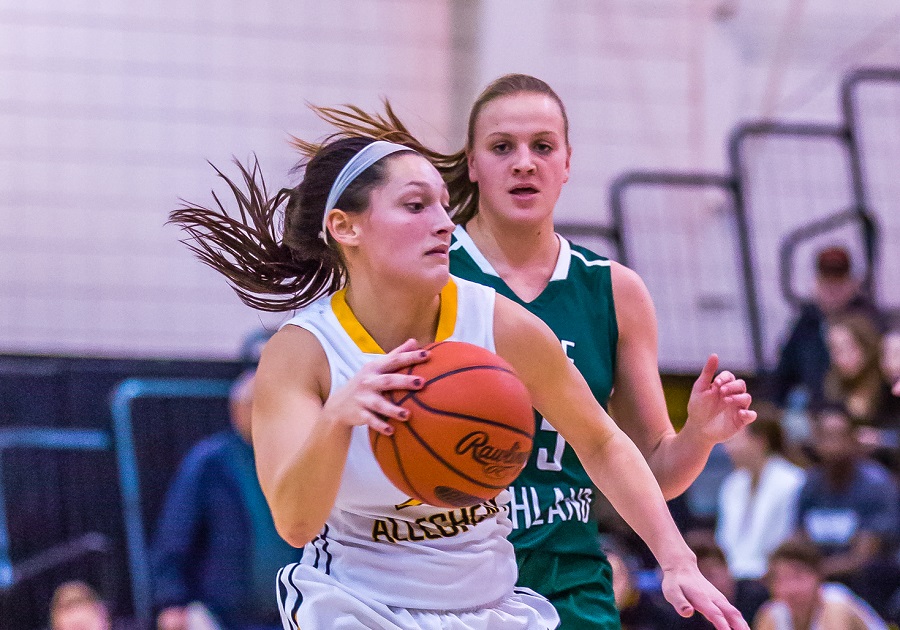 Trailing by 14 points late in the third quarter, North Allegheny scored 22-unanswered points en route to a thrilling 46-38 victory over the Pine-Richland Rams in the second round of the PIAA playoffs. The Tigers defense forced the Rams into nine turnovers in the fourth quarter and completely blanked Pine-Richland in the final eight minutes of the game. The incredible comeback gives the Tigers a season sweep of their Section 3 rival and earns NA a rematch with the WPIAL champion Norwin Knights on Friday night in the PIAA quarterfinals.

In a fast-paced first quarter, the lead changed hands six times and Pine-Richland held a 16-13 advantage thanks in part to the perimeter shooting of senior Chelsea Rourke. Rourke scored seven points in the quarter and finished with 10 points on the night. North Allegheny senior Abby Gonzales helped the Tigers keep pace in the first period and scored eight of NA’s first 11 points of the game.

Pine-Richland maintained a hot hand in the middle quarters and built a 38-24 lead behind 47 percent shooting from the field. Junior Amanda Kalin was the catalyst for the Rams and netted a team-high 17 points. In the third quarter, Kalin was the facilitator of the PR attack by drawing in the NA defense and kicking the ball out to open teammates on the perimeter. Rourke, Gianna DeTemple and Caitlyn Byerly all drained 3-pointers in the third quarter for the Rams.

North Allegheny trimmed the deficit to 38-28 by the end of the fourth quarter and turned loose a steel-trap defense that did not allow point for the remainder of the game. While the PR offense went from sizzle to fizzle, Gonzales and fellow senior Taylor Lake took control of the game, scoring a combined 11 points. Gonzales finished with 15 points on the evening and Lake scored a game-high 18 points. For her efforts in the comeback, Lake was named the Wright Automotive Player of the Game.

Trailing 38-35 with 2:42 remaining in the fourth quarter, Lake tied the game at 38-38 with a layup and free throw. With 1:30 to play, Piper Morningstar scored the go-ahead bucket to give NA a 40-38 advantage. Paired with their lock-down defense, the Tigers put the game away at the free-throw line for a 46-38 triumph.

The win improves North Allegheny’s record to 24-4 overall, making it the fourth consecutive year the Tigers have won 24 games or more in a season. Pine-Richland’s season comes to an end with a 19-7 overall record. NA’s PIAA quarterfinal matchup with Norwin will be broadcast live via the internet on the North Allegheny Sports Network.