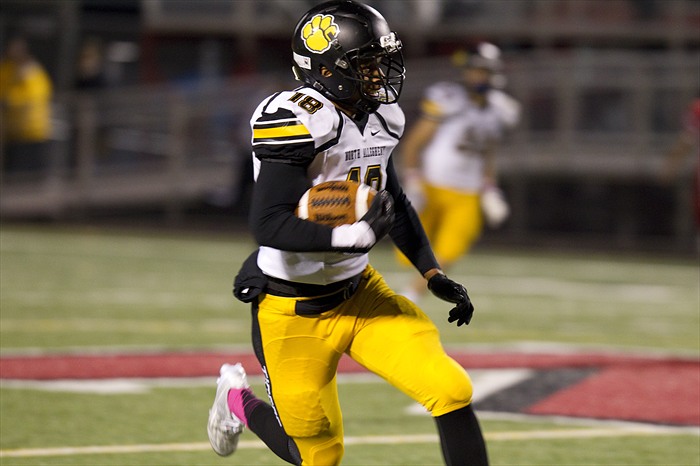 In a rough and rugged rivalry game against the North Hills Indians, the North Allegheny defense forced six turnovers to lift the Tigers to a 38-10 victory at Martorelli Stadium on Friday night. The win, North Allegheny’s seventh in a row and fifth straight against North Hills, clinched a share of the Northern Eight Conference title for the black and gold.

The 56th meeting between North Allegheny and North Hills was dictated by hard-hitting defense and special teams, and the first break of the night occurred midway through the first quarter when a fake punt by North Hills failed at its own 29-yard line.  The Tigers took advantage of the prime real estate and scored six plays later on an 11-yard touchdown pass by Riley Trueman to Alex Mesaros for a 7-0 North Allegheny lead.

The ensuing possession for North Hills lasted only two plays thanks to a Vaughn Wallace hit on running back Nick Santucci that jarred the ball loose at the Indians 32-yard line. Niko Mermigas pounced on the football for NA and the offense again turned the free gift into points. This time, senior kicker Seth Mancuso delivered a 25-yard field goal to increase the NA lead to 10-0 with 57 seconds remaining in the second quarter.

The North Hills defense also had a big night and forced the first of five NA turnovers early in the second quarter. Josh Gazica intercepted an Ethan Maenza pass at the 17-yard line and returned it to the NA 8 to set up the Indians with a 1st and goal. However, the North Allegheny defense stood tall and forced the Indians to settle for a 22-yard field goal by Jacob Seiler which cut the score to 10-3, Tigers, with 9:23 left in the first half.

The Tigers defense struck again with 5:23 to play in the half when Quenten Sansosti intercepted a Jake Elsayed pass at the NA 34-yard line. One play later, North Allegheny hit a big play when Maenza tossed a pass to Trueman for a 66-yard touchdown and a 17-3 North Allegheny advantage with 5:05 on the second quarter clock.

North Allegheny started with the football in the second half but was forced to punt to open the third quarter. The punt went awry because of a low snap and Trueman fumbled the ball which was recovered by the Indians Brice Walker who scampered 11-yards for the touchdown and trimmed the NA lead to 17-10.

After another three-and-out by the NA offense it appeared North Hills was gaining momentum, but the Tigers defense was about to swing the pendulum back in NA’s direction. On a 2nd and 10 from the NH 47-yard line, Francis Duggan stripped Santucci and Mesaros recovered the fumble and returned it to the Indians 38-yard line. Determined to change the flow of the game, North Allegheny used three tight ends and an I-formation to power its way down the field and capped the five-play drive on a 3-yard rushing touchdown by Michael Pope for a 24-10 lead with 5:38 left in the third quarter.

The North Allegheny defense, which dominated the game with crucial turnovers, came up with two interceptions in the fourth quarter to put the game away. Maenza intercepted an Elsayed pass and raced 95-yards for a touchdown with 8:36 remaining in the game for a 31-10 lead. Later in the period, linebacker Ijhad Bonner took an interception 53 yards for a pick-six to bring the final score to 38-10, North Allegheny.

The stingy play of NA’s defense limited North Hills to 171 total yards and kept talented junior running back Nick Santucci contained for 81 yards rushing. With so many contributions on defense, the North Allegheny Sports Network selected Mark Alesantrino as the Wright Automotive Player of the Game. The senior linebacker corralled North Hills’ ball carriers for a team-high nine tackles and one sack.

North Allegheny improves to 8-1 overall and 6-1 in the Northern Eight Conference with the win. North Hills slips to 3-6 overall and 3-4 in conference play. Both teams will await the WPIAL playoff pairings which will be released on Monday night. The Tigers will open the WPIAL playoffs at home next Friday.