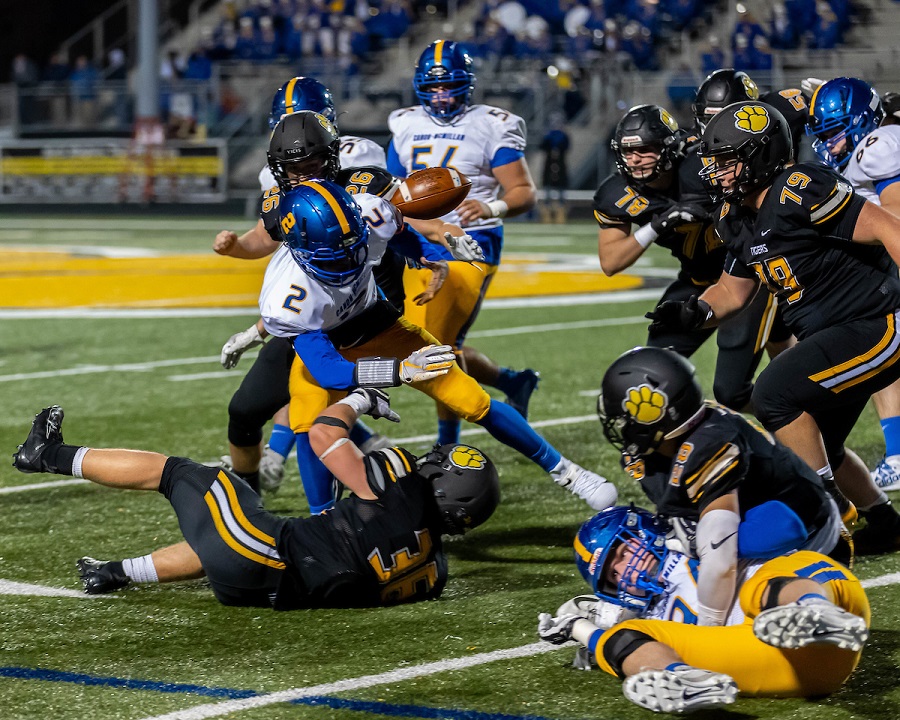 Senior quarterback Ben Petschke accounted for five touchdowns, running for one and passing for four more, as North Allegheny crushed Canon-McMillan in the WPIAL Class 6A quarterfinals on Friday night, 48-7. Junior receiver Khalil Dinkins hauled in three of Petschke’s passing touchdowns, finishing with four catches for 104 yards. For his efforts, Dinkins was named the Wright Automotive Player of the Game.

North Allegheny wasted little time in this contest and took the opening possession 61 yards on six plays, culminating the drive with a 1-yard QB sneak by Petschke for a 7-0 lead. Canon-McMillan’s Chris Davis fumbled the ensuing kickoff and NA’s Braden Frank recovered the ball at the Big Macs 16-yard line. One play later, Petschke tossed a 16-yard touchdown to Luke Colella for a 13-0 lead with 9:30 left in the first quarter.

On the Big Macs first play from scrimmage on their next possession, quarterback Deuce Lyons fumbled and NA’s Ben Grafton recovered at the CM 28-yard line. Linebacker Brady Leczo forced the fumble with a jarring hit. The Tigers again capitalized and scored soon after on a 3-yard fade from Petschke to Dinkins for a 19-0 lead. Petschke connected with Percise Colon on a pass for the two-point conversion, bringing the score to 21-0, Tigers. Colon rushed for 121 yards on 12 carries and surpassed the 1,000-yard mark on the season.

From there the rout was on. Leczo scored on a 10-yard touchdown run with 4:19 to go in the first quarter for a 27-0 lead. Petchke and Dinkins collaborated on a pair of scoring passes in the second quarter, one from 76 yards out and another from 15 yards out, to give NA a 41-0 lead at intermission. Petschke completed 6 of 11 passes for 140 yards.

With the mercy rule invoked by the start of the second half, the Tigers cruised to the win. Canon-McMillan broke the shutout with a 1-yard touchdown run by Isaiah Chandler that trimmed the NA lead to 41-7 with 6:59 remaining in the third quarter. Sophomore running back Kolin Dinkins capped the scoring with a 1-yard touchdown run with 5:54 to go in the fourth quarter to close out a 48-7 win.

The North Allegheny defense allowed only 218 yards to Canon-McMilland and forced three turnovers on the night, including a Tanner Potts interception in the second half. Ryan Angott was a bright spot for Canon-McMillan, rushing for 87 yards on six carries.

North Allegheny improves to 10-1 on the season and advances to the WPIAL semifinals for the fourth straight year. Canon-McMillan’s season comes to an end with a 3-8 record. The Tigers earn a rematch with Pine-Richland next week in the semifinals at 7:00 p.m. The game will be broadcast live by the North Allegheny Sports Network.