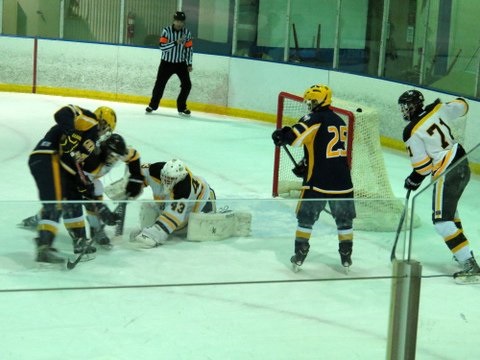 North Allegheny and Central Catholic played a pair of tight games in the regular season, but in the opening round of the PIHL playoffs on Monday night the top-seeded Tigers left little doubt to the outcome in a 7-0 triumph over the Vikings. Sophomore Erik Chidester notched a natural hat trick to begin the game and the rout was on. For his efforts, Chidester was named the Wright Automotive Player of the Game.

Chidester’s third goal, a power play tally at the 3:32 mark of the second period, was the first of three goals the Tigers scored in a 33 second span.  Dominick Zangaro and Nathan Taylor followed with goals to give North Allegheny a 5-0 lead with 12:55 remaining in the period.  Joe Zappia added another goal in the second period and Taylor rounded out the scoring with a third period marker to bring the final score to 7-0, Tigers.

NA goalie Joe Hubert made 21 saves for the shutout. Central Catholic goalie Nate Cava stopped 36 of 43 shots on the night.

North Allegheny advances to the PIHL Class AAA semifinals on March 10.  The Tigers will play the winner of the Seneca Valley-Canon McMillan game to be played on Tuesday night.