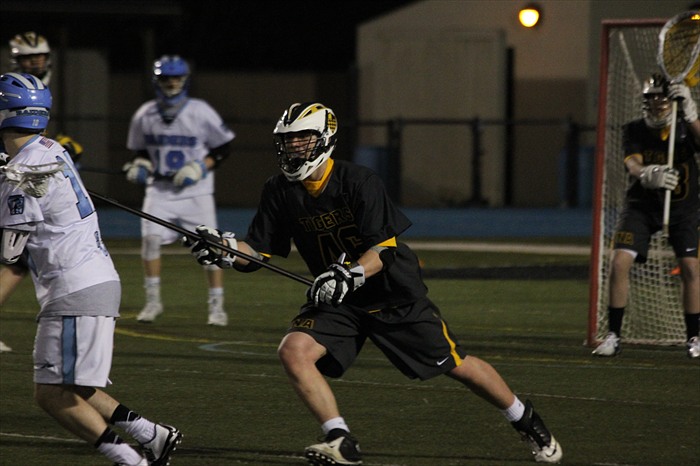 In a battle between two first place teams, North Allegheny punished the Upper St. Clair Panthers on Wednesday night, 15-4, in a non-section contest on the road. The Tigers, who lead Section 2 with a 5-0 record, thoroughly dominated the Panthers who are tied for first place in Section 1 with a 3-0 mark.

The more physical Tigers controlled the game by commanding possession with 43 ground balls to just 11 for the Panthers.  North Allegheny faceoff man Zach Smith won 16 of 18 draws and Alec Vissotski won 4 of 5 faceoffs when called upon.  Smith also led the team in ground balls with 14.

With possession squarely favoring North Allegheny, the black and gold cashed in big time with three players posting hat tricks.  Sophomore Gavin Hagen led with four goals, followed by Smith and Kyle Rullan who tallied three goals each.  Teddy Ednaczyk notched two markers, with Jacob Zemet, Will Petraglia and Aren Cox also scoring goals in the blowout win.  The Tigers built and 8-2 lead by halftime and coasted to victory in the second half.

The Panthers managed very little offensively and had only 12 shots for the entire game, another indicator of NA’s ball control and staunch defense. Sophomore Jack Kairys led with five forced errors and sophomore Greg Ferringer had three forced errors early in the game before leaving with an injury.

North Allegheny raises its overall record to 11-1 with the victory.  Upper St. Clair slips to 8-6 overall. The Tigers return to action on Friday night with a non-section game against Bethel Park at Newman Stadium. Start time is slated for 7:30 pm.