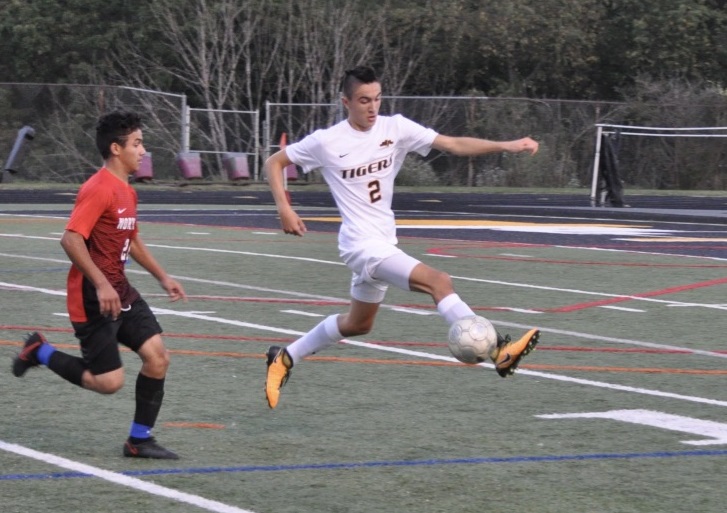 Thursday’s matchup at Newman Stadium featured two teams at opposite ends of the spectrum in the Section 1-AAAA standings. The first-place North Allegheny Tigers won in a rout over the last-place North Hills Indians, 9-0. The victory was NA’s fifth in a row and kept the Tigers perfect in section play through the first half of the regular season.

The Tigers struck early and often against their neighborhood rival and senior Sean Atwater started the party with two goals in just over five minutes of play for an instant 2-0 lead. The Atwater goals began a trend of four NA players who tallied two goals apiece. Josh Luchini and Cam Yurick each scored two first-half goals to give the Tigers a 6-0 lead by halftime. Luchini’s markers increased his season total to a team-best 14 on the season.

In the second half, Sam Wilson continued the two-goal tendency by burying a pair of shots into the back of the North Hills net to increase the lead to 8-0. The only scorer who posted a single goal was junior Nico Ramirez who capped the scoring with a tally with 7:00 remaining to bring the score to its eventual final, 9-0.

Goalies Grant Glorioso and Devon Angermeier combined for the shutout in a heavily one-sided game. The Tigers outshot the Indians, 18-1, and every NA player saw playing time. For his efforts in starting the blowout early on, senior Sean Atwater was named the Wright Automotive Player of the Game.

North Allegheny improves to 8-2 overall and 5-0 in Section 1-AAAA. North Hills remains winless with a mark of 0-7 overall and 0-5 in the section. The Tigers will visit Upper St. Clair on Saturday at 2:30 p.m.