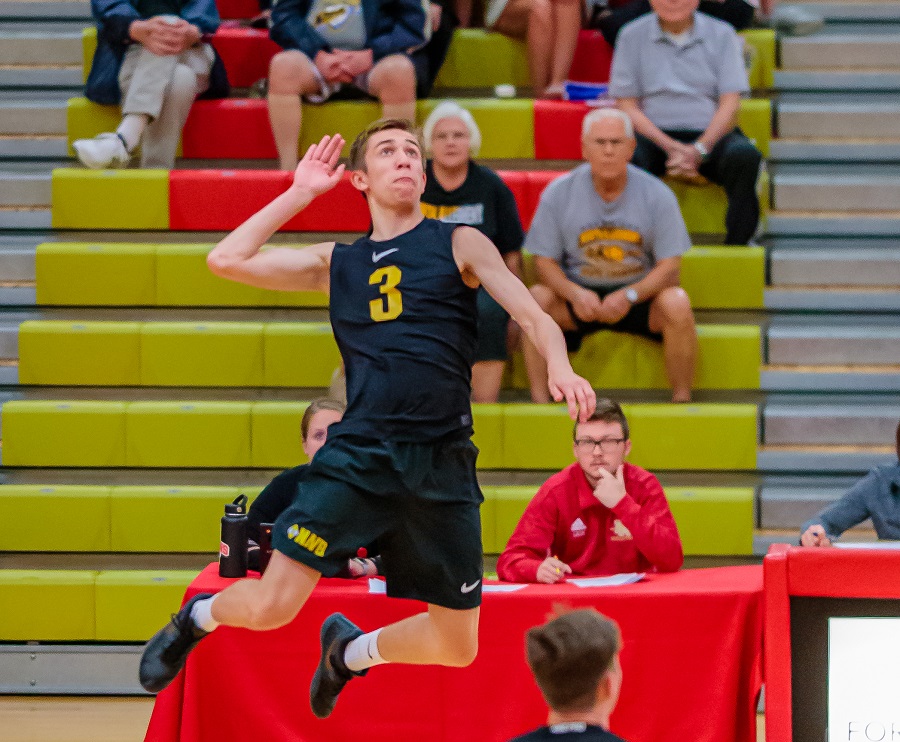 The North Allegheny boys’ volleyball team advanced to the state finals for the third consecutive season with a 3-1 victory over Bethel Park in the PIAA Class AAA semifinals on Tuesday night at Penn Hills High School. The reigning PIAA champion Tigers earned the victory by set scores of 25-16, 21-25, 25-23 and 25-19.

The contest was a rematch of the WPIAL championship and Bethel Park was hoping to exact some revenge for their title game defeat. Bethel Park jumped out to an 8-5 lead in the first set before NA’s well-balanced attack took hold. Seniors Jeremiah Zemet and Drew Hunker notched three kills apiece, including a set-ending kill by Zemet, to give the Tigers a 25-16 victory. Hunker finished with a team-high 16 kills, one of four NA players in double figures in kills. Zemet added 10 kills.

Bethel Park went from sizzle to fizzle in the first set, but stayed hot in the second set to pull out a 25-21 win and evened the match score at 1-1. Senior Max Cooley led the Black Hawks with four kills in the set on his way to a game-high 23 kills.

Cooley, the WPIAL Most Valuable Player, proved his worth again in the third set with eight kills. Despite Cooley’s success, North Allegheny opened up a 15-11 lead and outlasted the Black Hawks for a 25-23 win. Senior Ben Mendes provided three crucial kills in the third set, including the final point to clinch a close win.

North Allegheny held a narrow lead again in the fourth set with a 21-19 advantage late. However, the Tigers scored the final four points of the set to prevail, 25-19, and clinch a berth in the PIAA championship game for a record 17th time. Senior Alex Zubrow provided a pair of blocks and Grant Jones served up an ace during the final run of points that iced the victory. Mendes totaled four kills in the final set and ended the night with 13 kills, earning him Wright Automotive Player of the Match honors.

With their 45th consecutive win, North Allegheny improves to 22-0 overall on the season. Bethel Park ends year with a 20-2 record with both of its losses to the Tigers.

North Allegheny advances to the PIAA championship game and will face Central York in the state final on Saturday at 1:30 p.m. at Penn State University’s Pegula Ice Arena. The state championship will be broadcast live via the internet on the North Allegheny Sports Network.