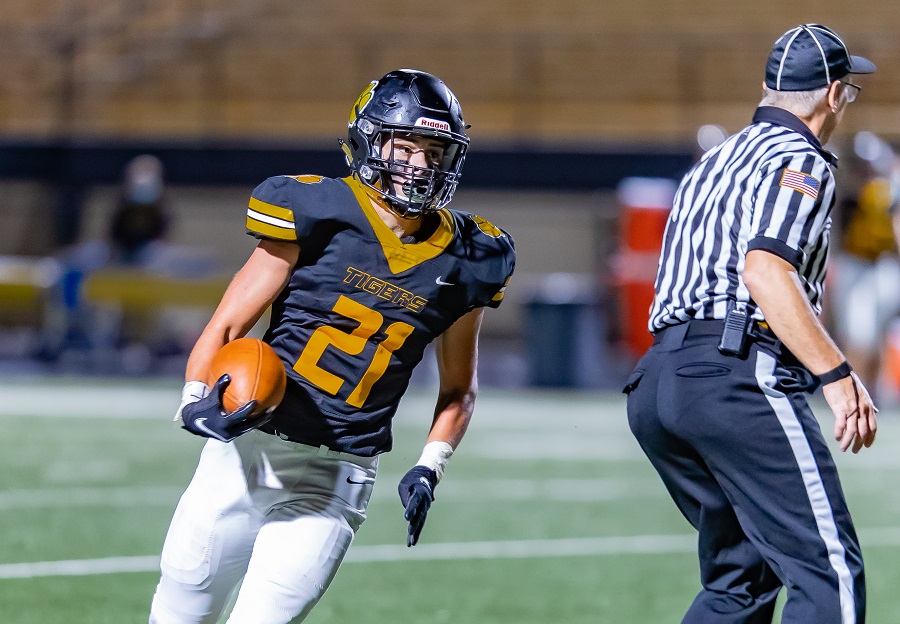 The last time North Allegheny faced Penn Hills in 2017, the Tigers defense forced five turnovers in a 27-16 victory. On Friday night in the 2020 season opener, the North Allegheny defense once again hounded and harassed Penn Hills and freshman quarterback Julian Dugger in a 27-6 triumph at Newman Stadium. The Tigers sacked Dugger five times and allowed a scant 134 total yards in the victory.

The first quarter yielded very little from either side and was a defensive struggle that ended in a scoreless tie. In the second quarter, Penn Hills took advantage of a short field to score the first touchdown of the night. Starting at the NA 36-yard line, the Indians embarked on a five-play drive that culminated on a Julian Dugger 22-yard touchdown pass to older brother, junior Jaden Dugger, for a 6-0 lead. The extra point kick failed, keeping the Penn Hills lead at six points with 7:22 remaining in the second quarter.

Held in check for most of the first half, the North Allegheny offense was able to break off a big play that evened the score late in the second quarter. With 2:55 to play before halftime, senior receiver Mason Kress took an end around 41 yards for a touchdown to knot the contest at 6-6. The Tigers extra point kick failed and the score remain tied at the half.

With just over seven minutes remaining in the third quarter, North Allegheny launched a pivotal nine-play, 80-yard drive that was sparked by a 56-yard pass from senior quarterback Greg Phillips to senior receiver Khalil Dinkins to the Penn Hills 2-yard line. Two plays later, junior tailback J.R. Burton plunged into the end zone for a 1-yard touchdown run and a 13-6 lead.

Just 1:15 after the Burton touchdown, the North Allegheny defense forced Julian Dugger into a costly interception that senior linebacker Sean Metcalf returned 30 yards for a touchdown and a 20-6 advantage. For his interception and strong defensive effort on the evening, Metcalf was selected as the Wright Automotive Player of the Game.

Following the Metcalf interception, the Tigers grinded down the Indians in the fourth quarter and put the game on ice with a 5-yard touchdown run with 2:41 remaining by junior quarterback Tanner Potts to cap off a 27-6 victory.

With the win, North Allegheny improves to 1-0 overall and will try for its first conference win next week with a home date against the Baldwin Highlanders.