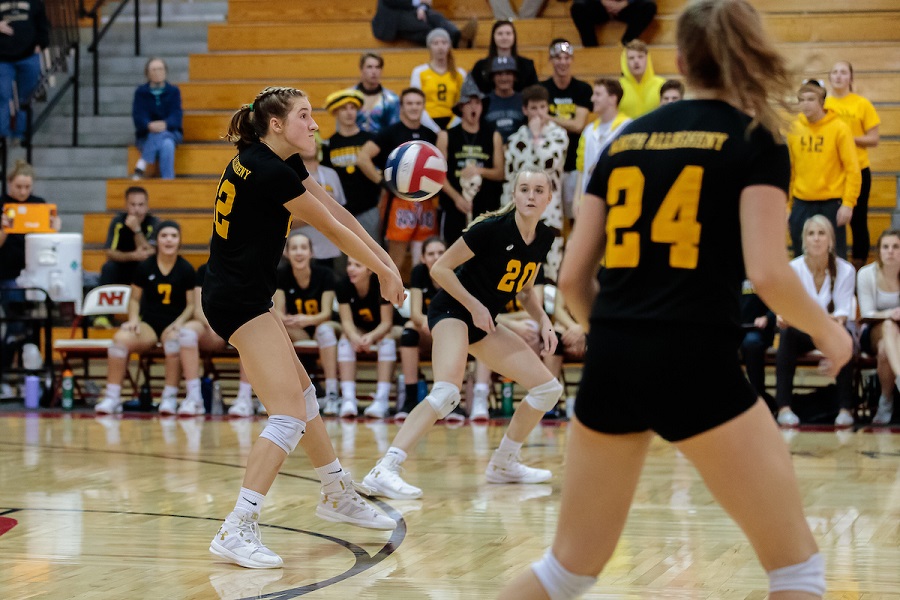 The North Allegheny girls’ volleyball team punched its ticket to the WPIAL finals for the second straight season and fifth time in the last six years with a 3-0 sweep over the Oakland Catholic Eagles on Wednesday night. The Tigers won their 42nd consecutive match by set scores of 27-25, 25-17 and 25-17 in the Class AAAA WPIAL semifinals.

Appearing in the WPIAL semifinals for the 12th time in the last 13 seasons, the top-seeded Tigers were put to the test in the first set by the fourth-seeded Eagles. Oakland Catholic was led by junior outside hitter Taylor Cigna who posted five of her team-leading 12 kills in the opening set. Following Cigna’s fifth kill, the Eagles led 25-24. North Allegheny tied the score on an Anna Sprys kill and took a 26-25 lead when Sprys and Paige Morningstar denied Cigna on a block assist. The Tigers won the set on an Oakland Catholic error to secure a 27-25 victory. Junior Madison Curran was strong in the first set as well for the Tigers, chipping in with three kills.

North Allegheny and Oakland Catholic were tied 8-8 in the second set before the Tigers returned to form and claimed a 25-17 win. Sprys totaled five kills and junior Avery Tuman notched three kills.

In the third set, North Allegheny garnered a 4-3 advantage in the early going and led for the rest of the night en route to a 25-17 win and a WPIAL semifinal sweep of the Eagles. Sophomore Paige Miller helped put the finishing touches on the victory with five kills. A sparkplug for NA in sets two and three, Paige Miller was named the Wright Automotive Player of the Game.

With the win, North Allegheny improves to 18-0 on the season and advances to face the Baldwin Highlanders in the WPIAL championship on Saturday at 6:00 p.m.