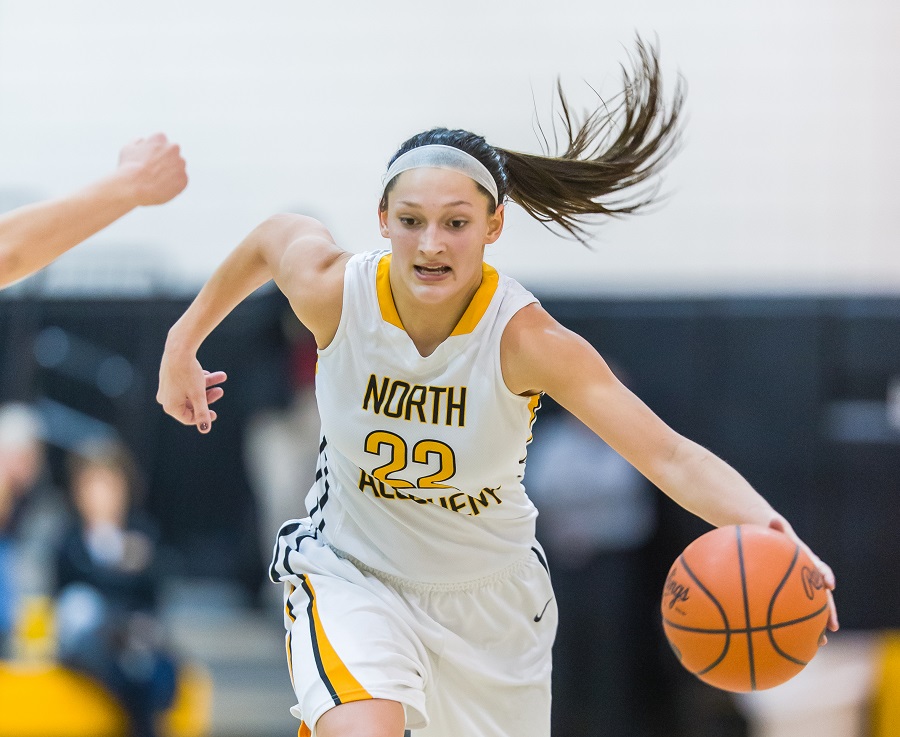 The North Allegheny girls’ basketball team suffered a heartbreaking defeat on Tuesday night, dropping a 43-42 decision to the Cumberland Valley Eagles in the PIAA semifinals. NA senior Abby Gonzales knocked down a go-ahead 3-pointer with 1.9 seconds remaining to give the Tigers a 42-41 lead that seemingly assured victory. However, Cumberland Valley’s Morgan Baughman was fouled on the ensuing inbounds pass and sank two clutch free throws with 0.8 seconds left to send the two-time reigning state champions back to Hershey for the PIAA title game on Friday night.

It took a while for both teams to warm up in the first quarter but North Allegheny seized a 9-2 advantage and maintained a lead well into the fourth quarter. The first bout of adversity was dealt to the Tigers in the third quarter when University of Chicago recruit Taylor Lake left the game with an apparent leg injury.  Despite losing Lake, who scored six points in the first half, North Allegheny pressed on and took a 32-28 lead into the fourth quarter thanks in large part to the play of Gonzales. The University of Delaware recruit ended the night with 16 points and was named the Wright Automotive Player of the Game.

Ice cold in the first half with just three points on 1 of 7 shooting from the field, CV sharpshooter Morgan Baughman found her rhythm and poured in three 3-pointers in the second half. Baughman totaled 15 points in the game and tied the contest at 34-34 with a trey with 5:29 remaining in the game. The Eagles soared to their first lead with 4:42 to play on two free throws by Villanova recruit, Kelly Jekot. The two-time Gatorade Pennsylvania Player of the Year gave Cumberland Valley a short-lived 36-34 lead.

Sophomore Piper Morningstar answered right back with a 3-pointer to put NA back ahead 37-36 and the seesaw trend of the final four minutes began . Jekot, who finished the night with a game-high 19 points, retaliated with a jumper to give CV a 38-37 lead with 2:38 to go. Playing most of the night in foul trouble, junior Hailey Zeise returned the lead to the Tigers, 39-38, on a layup with 2:12 remaining.

Cumberland Valley managed to gain the lead again on two free throws by Baughman to bring the score to 40-39, Eagles. Attempting to answer back, Zeise was called for a charge and fouled out of the game leaving the Tigers without two of its biggest threats in the waning minutes of the game. After a 1 for 2 trip to the charity stripe by Jekot made it a 41-39 Eagles lead, the gutsy Tigers were left with 40 seconds left and the basketball.

North Allegheny wound the clock down to 11 seconds before calling a timeout. Following the stoppage in play, Gonzales found herself open on the right wing and delivered a huge 3-pointer with 1.9 seconds remaining to pull NA in front, 42-41. Unfortunately for the Tigers, Baughman was fouled immediately after and came through for the game-winning free throws to advance Cumberland Valley to the title game for the third straight season.

North Allegheny finishes the season with a 25-5 record. Cumberland sits at 28-3 overall and will play Cardinal O’Hara in the PIAA championship game on Friday night. Congratulations to the Tigers players and coaching staff for a memorable and outstanding 2015-2016 season.