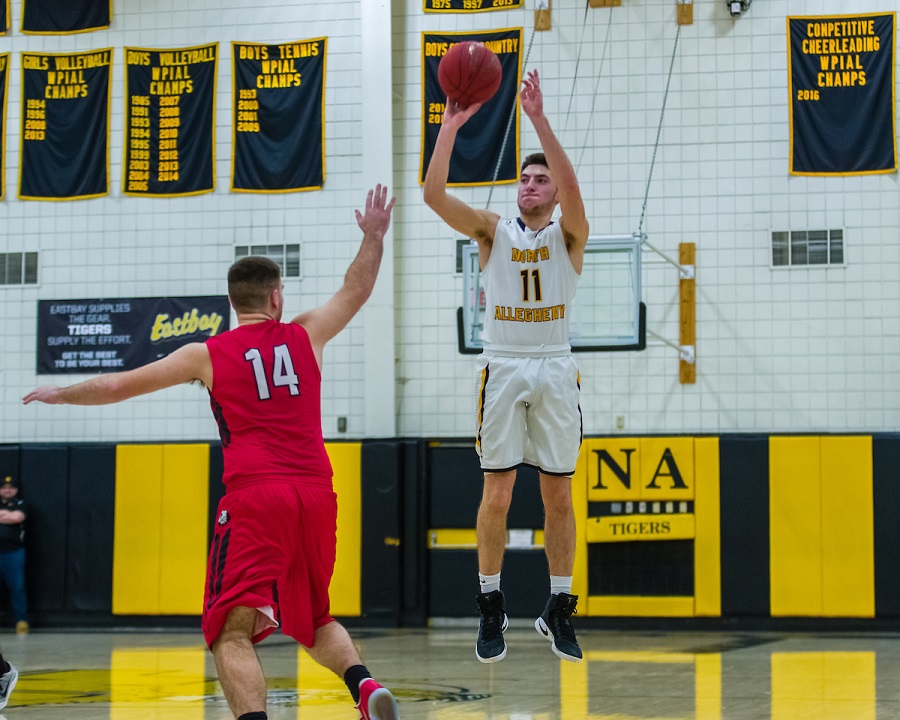 The North Hills Indians rallied from a 13-point deficit in the second half to beat the North Allegheny Tigers on Friday night, 71-63, in the Section 1-AAAAAA finale. Senior Nick Smith led the comeback with a game-high 26 points on 10 of 19 shooting from the field. North Hills also forced North Allegheny into 13 turnovers, nine in the second half, which aided the Indians’ comeback bid.

The Tigers led throughout the entire first half and held a 34-27 lead at intermission. NA’s inside-out game was impressive with senior Isaac Barnes on the inside and senior guard Luke Carter’s hot hand on the outside. Barnes totaled 18 points on the night, while Carter poured in a team-high 22 points, including 6 of 8 shooting from beyond the arc. For his efforts, Carter was named the Wright Automotive Player of the Game.

Barnes, Carter and junior Curtis Aiken, who chipped in with 12 points and 10 rebounds, helped NA build a 13-point lead with 4:55 remaining in the third quarter. However, North Hills began to chip away and cut the Tigers advantage to 55-51 by the end of the third period. The Indians outscored the Tigers, 20-8, in the final stanza to earn a 71-63 come-from-behind victory. Along with Smith’s big night, Kam Taylor netted 15 points and Andrew Paulauskas added 12 points.

North Allegheny dips to 12-8 overall and 6-6 in Section 1, finishing in fourth place in the section standings. North Hills improves to 16-5 overall and 8-4 in the section, taking second place. The Tigers playoff-bound Tigers will return to the hardwood on Saturday afternoon against the Gateway Gators at 1:30 p.m.