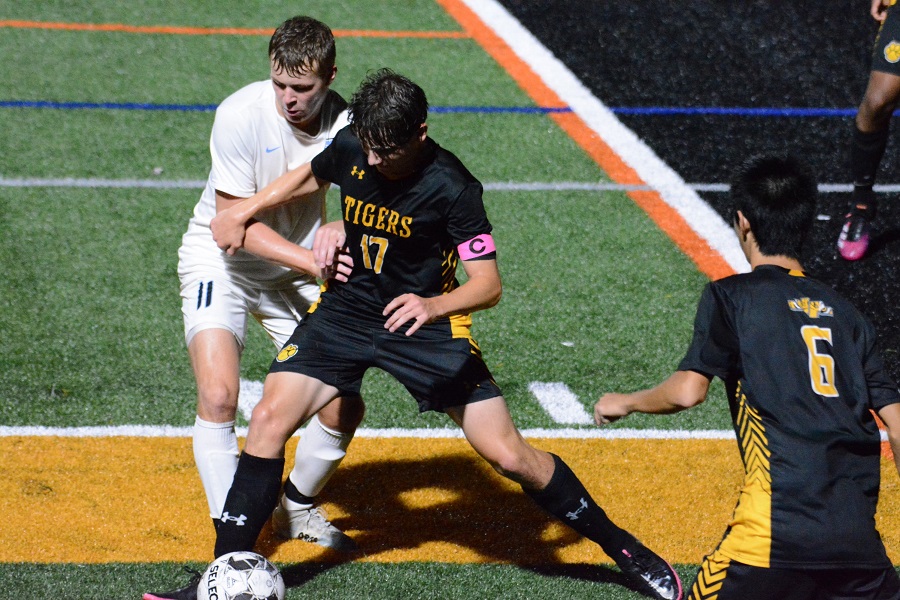 Home field advantage was not enough to propel the North Allegheny boys’ soccer team to a win on a rainy Tuesday night at Newman Stadium. Undefeated Seneca Valley shut out NA 1-0 in a section contest, the first of two between the teams in the regular season.

North Allegheny had the upper hand early, just like many of the games this season. The Tigers came out of the gate fast and almost had the first goal of the game. With 35:43 left in the first half, junior forward Brandon Angermeier tipped a pass in the goal box past Raiders goalkeeper Ryan Krumenacker, but the play was deemed offsides and the goal was taken away. North Allegheny kept the pressure on the Seneca Valley defense through most of the first half.

With just under 11 minutes to play in the opening frame, Raiders midfielder Beaux Lizewski had a prime opportunity to score from a corner kick. The junior was positioned in front of sophomore goalkeeper Dante Accamando and headed the ball just above the crossbar.

Momentum swung in the direction of the visitors in the second half, as Seneca Valley found its stride. The lone goal of the contest came in the 71st minute, when senior midfielder Nathan Prex took a cross-field pass to the left post and tipped the ball past a diving Accamando.

A late surge gave the Tigers life in the final minutes, but the combination of Evan Anderson, Kevin Luo and Matt Mihm offensively could not find the back of the net.

Accamando earned Wright Automotive Player of the Game honors for his eight saves on nine shots.

The Raiders keep a 22-game winning streak alive dating back to last season, while improving to 8-0 overall and 5-0 in section play.

The Tigers fall to 4-3 overall and 2-3 in section play. NA is back in action Thursday on the road against North Hills.