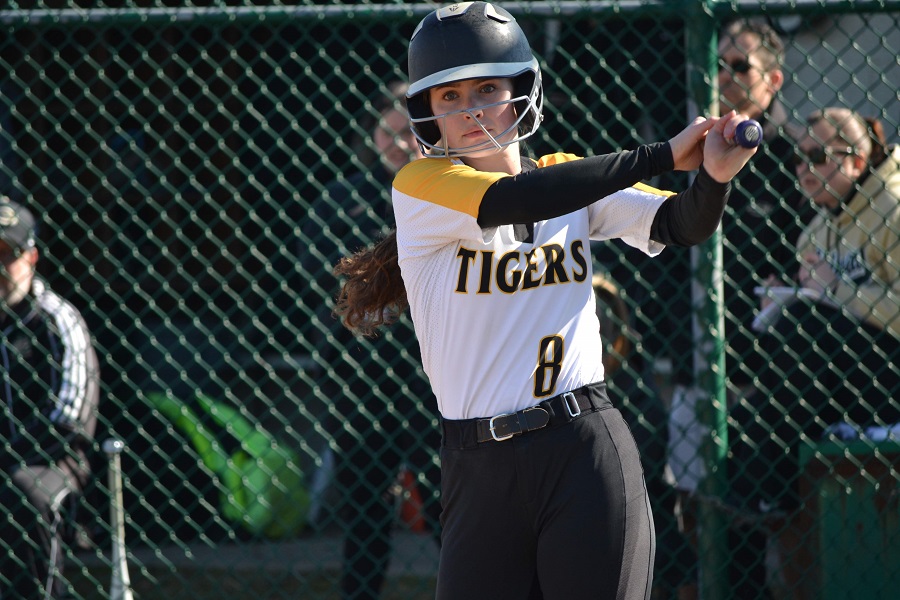 The North Allegheny softball team fell to the Seneca Valley Raiders on Tuesday afternoon, 3-2, in Section 2-6A action. The Raiders rallied from a 2-0 deficit in the late innings to stay in a third-place tie with Hempfield in the section. Despite the loss, the Tigers remain in first place with a ½ game lead over second-place Norwin, their next opponent.

North Allegheny led the contest for the majority of the game and struck for an early 1-0 lead when senior Ashley Adams rocketed a solo homer to straightaway centerfield off of Slippery Rock commit Claire Zimmerman. Adams is 3 for 6 with three RBI’s in two games against Zimmerman this season.

With two outs in the top of the third inning, the Tigers used back-to-back doubles from Rachel Martindale and Brooke Serbin to increase the NA lead to 2-0. Serbin’s double, one of two hits on the day for the senior centerfielder, drove in Martindale for her 11th RBI of the season. Along with a tremendous tumbling catch in the fourth inning, Serbin’s two-hit performance earned her Wright Automotive Player of the Game honors.

The Tigers maintained their 2-0 lead until the Raiders were able to finally breakthrough against Adams in the bottom of the fifth. Julia Erhman led off with a single and Kearson Wagner reached on a fielder’s choice to put runners at first and second with nobody out. Maura Pasquale laid down a sacrifice bunt and a subsequent NA error allowed Pasquale to reach base and Erhman to score, cutting the NA lead to 2-1. Moments later, an RBI groundout by Mack Baker tied the game at 2-2.

North Allegheny had a chance to regain the lead in the top of the sixth with the bases loaded and only one out. However, Zimmerman was able to wiggle out of the jam with a popout and flyout to keep the game tied, 2-2.

In the bottom of the sixth, a sacrifice fly by Wagner scored Madison Hans to provide the Raiders with a 3-2 lead. Zimmerman tossed a 1-2-3 top of the seventh to close out the victory.

Zimmerman allowed only five hits and two runs to earn a rare victory against the Tigers. Adams was saddled with the loss, permitting three runs (two earned) with five strikeouts and four walks.