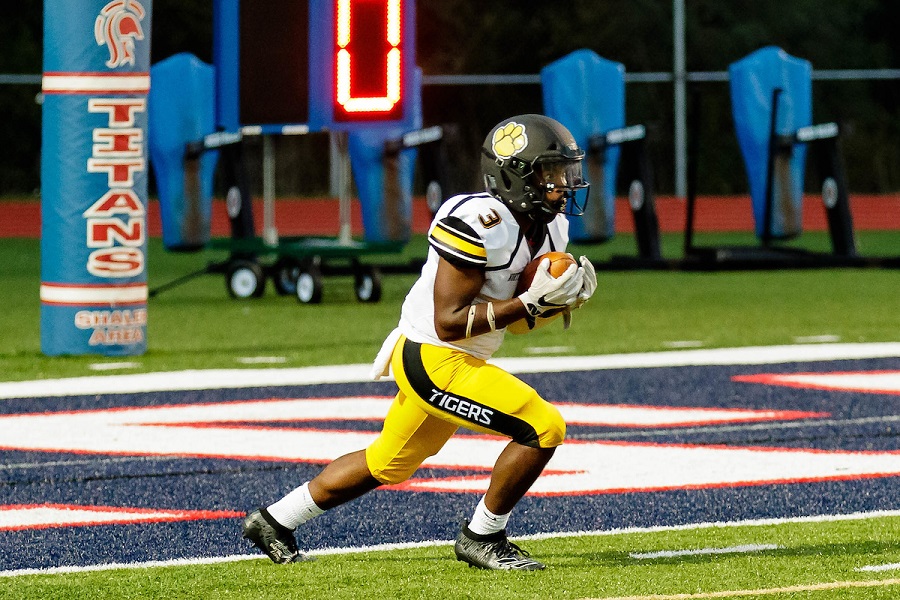 In the regular season finale on Friday night in Gibsonia, North Allegheny dropped its first game of the season with a 42-14 loss to Pine-Richland. The outcome, coupled with a Central Catholic win over Mt. Lebanon, creates a three-way tie for the Quad County Conference title. While the crown is shared between the three teams, Central Catholic and Pine-Richland garner a quarterfinal-round bye. North Allegheny gets the No. 3 seed in the Class 6A playoffs and will host Canon-McMillan in the quarterfinals next week.

Pine-Richland junior quarterback Cole Spencer passed for 396 yards and five touchdowns. The Rams signal caller hurled his first touchdown pass of the game on the second play from scrimmage with a 79-yard strike to Eli Jochem for a 7-0 lead. After a three-and-out by the Tigers, Spencer struck again with a 78-yard touchdown heave to Day Day Johnson for a 14-0 advantage with 8:33 remaining in the first quarter.

North Allegheny settled into the game late in the first quarter and senior quarterback Ben Petschke tossed a 52-yard touchdown pass to Luke Colella on a middle screen to trim the PR lead to 14-7 with 1:35 on the clock. Colella finished the night with 2 receptions for 63 yards and also posted an interception on defense, earning Wright Automotive Player of the Game honors.

The Tigers tied the game at 14-14 with 9:06 to play in the second quarter courtesy of a 34-yard touchdown run by Percise Colon. The senior tailback ended the night with 77 yards on 17 carries.

It appeared NA might pull ahead when Ben Grafton recovered a Jochem fumble at the PR 45-yard line on the Rams next possession. However, the Tigers were unable to capitalize and the score remained 14-14.

Late in the second quarter, Pine-Richland’s Caden Schweiger recovered a fumble at the NA 39-yard line and the Rams used the turnover to retake the lead. Six plays later, Spencer tossed an 8-yard touchdown to Jochem to pull Pine-Richland ahead, 21-14, with 2:44 to play before halftime. Jochem totaled 11 receptions for 220 yards and three touchdowns.

In the second half, Pine-Richland’s defense intercepted a pair of passes and the Rams offense scored three times to pull away for a 42-14 win. Spencer threw a 7-yard touchdown pass to Luke Miller and a 28-yard scoring pass to Jochem. Rams running back Luke Meckler capped the scoring with an 8-yard touchdown run with 6:48 remaining in the fourth quarter.

North Allegheny and Pine-Richland both conclude the regular season with a 9-1 record and 7-1 conference mark. The Tigers will host Canon-McMillan on Friday in the WPIAL Class 6A quarterfinals. The game will be broadcast live by the North Allegheny Sports Network.