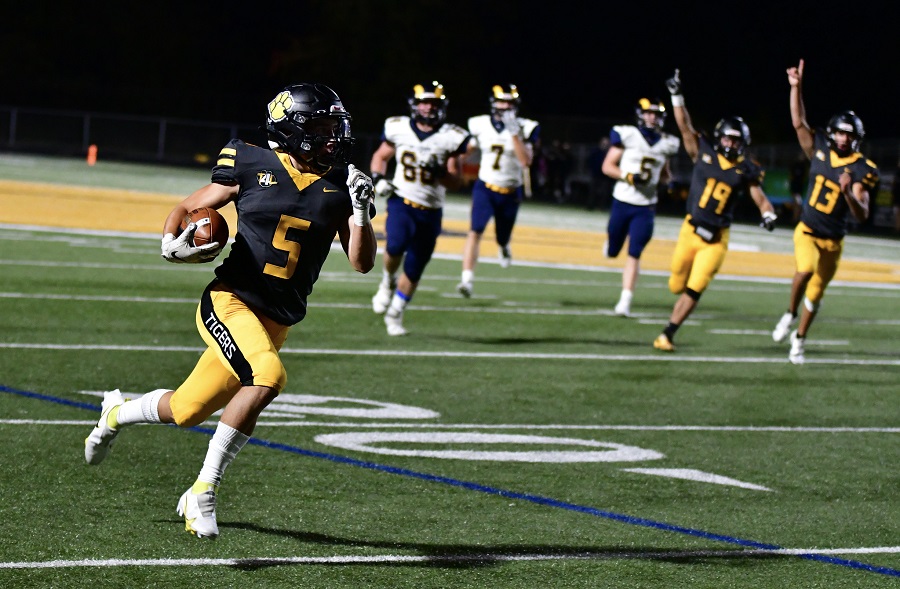 Two second half touchdowns and hard-nosed defensive play propelled North Allegheny to a 14-11 win over Mt. Lebanon on Friday night at Newman Stadium. The victory leaves the Tigers as the only remaining undefeated team in Class 6A. It’s also the 11th win in a row for the Tigers in their head-to-head series with the Blue Devils.

Through the first 24 minutes of action, the contest was a defensive struggle with the only points coming on a lengthy 11-play, 76-yard drive by Mt. Lebanon in the first quarter. The drive stalled at the NA 10-yard line, forcing the Blue Devils to settle for a 27-yard field goal by Casey Sorsdal and a 3-0 lead with 4:39 on the first quarter clock.

The field goal by Sorsdal remained the only points of the game until North Allegheny put together a scoring drive in the third quarter. Starting at the Mt. Lebanon 46-yard line, the Tigers used an 8-play march, culminating the possession with a 7-yard touchdown pass by quarterback Greg Phillips to tight end Sean Metcalf for a 7-3 lead with 4:07 left in the third. Phillips finished the night with a perfect 8 for 8 passing performance and 59 yards.

With the Blue Devils unable to answer on their next possession, the Tigers offense struck again. Powered by the running prowess of senior Kahlil Dinkins, who totaled 45 yards on 10 carries on the night, North Allegheny drove the ball to the Mt. Lebanon 33-yard line. On the sixth-play of the drive, the Tigers took advantage of the defensive attention on Dinkins and ran a reverse with senior Mason Kress who followed a convoy of blockers into the end zone for a 33-yard score and a 14-3 lead with 8:06 left in regulation.

It appeared North Allegheny had gained command of the contest following the Kress touchdown, especially after Mt. Lebanon was forced to punt on its next possession. However, when North Allegheny was forced to punt with 4:30 to go in the game, Mt. Lebanon’s Jack Smith broke through the line and blocked the kick, which was recovered by Ryan Martin at the NA 22-yard line. Just five plays later, quarterback Joey Daniels tossed a 10-yard touchdown pass to Eli Heidenreich, trimming the Tigers lead to 14-9 with 2:40 remaining. On the subsequent two-point conversion, Daniels delivered an accurate pass into the end zone to receiver Michael Beiersdorf to bring the score to 14-11, Tigers.

With no timeouts remaining, Mt. Lebanon attempted a last-ditch onside kick but it was recovered by Kress and the Tigers. North Allegheny chewed up all but one second off the clock in the waning minutes to finish off a 14-11 win.

Delivering another outstanding performance, senior linebacker Brady Leczo was once again selected as the Wright Automotive Player of the Game. Leczo totaled a team-high six tackles and two sacks to pace the defense.

Following the win, North Allegheny improves to 3-0 overall and 2-0 in the Quad County Conference. Mt. Lebanon dips to 1-2 overall and in conference play. The Tigers will visit Norwin next week at 7:00 p.m.