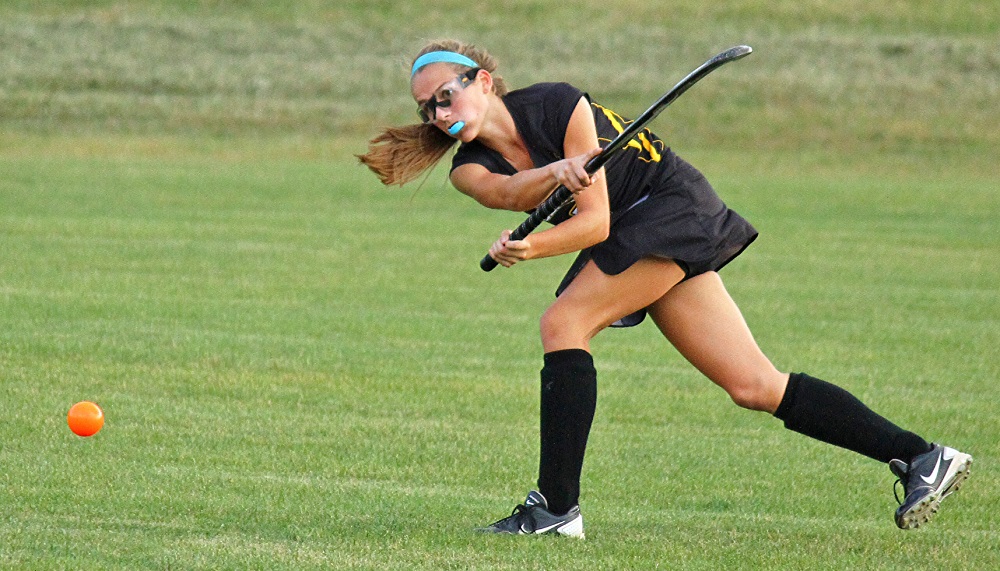 The Lady Tigers rolled into Latrobe on Tuesday afternoon to face the Wildcats, dominating the game and bringing home a 3-0 win.  Latrobe was unable to contain a speedy Tiger team, despite a bumpy, uneven grass surface that seemed to redirect passes and shots at every turn.  Although it took NA some time to adjust to the bumps and divots, the Tigers would keep pressing into Latrobe’s defensive zone, finally capitalizing on a shot at the 18 minute mark.  Junior Hannah Downing would register the first point on a rebound, blasting her shot past the Latrobe goalie from 10 yards in front of the net.  Downing would assist on the next goal as well, setting up junior Megan Guzzardi on a corner.  Guzzardi would bury the ball on a slap shot with five minutes remaining in the half to move the Tigers to 2-0.  Goalie Isley Smith would make two saves to keep the Wildcats at bay as they stormed into Tiger territory.

The second half would see continued effort from NA’s offensive and midfield units to keep a firm control of the game.  The Tigers would maintain constant pressure, stealing possession on Wildcat free hits and driving the ball, then picking it up in time to force an offensive threat.  The Lady Tigers would bombard the Latrobe goalie with 10 shots in the second half, capitalizing with 11 minutes to go, when senior Agathe Jaillard took a shot and sophomore Maddy Snyder picked up the rebound and poked it over the line to wrap up the scoring.  The Tigers would successfully defend four Wildcat penalty corners in the game, receiving help from junior Kendra Downey who added a defensive save.  Other notable Tiger playmakers in the contest included junior midfielder Nicole Burns and junior forwards Kailey Vogl and Jessica Brandon.  Goalie Morgan Mendenhall made a save on the lone Wildcat shot in the half, to secure the shutout.  Tiger goalies Smith and Mendenhall have combined for a total of 6 shutouts this season.

The Tigers host Hempfield in another section game on Wednesday evening at Newman Stadium.  Game time is set for 7:30 (jv 6:00.)