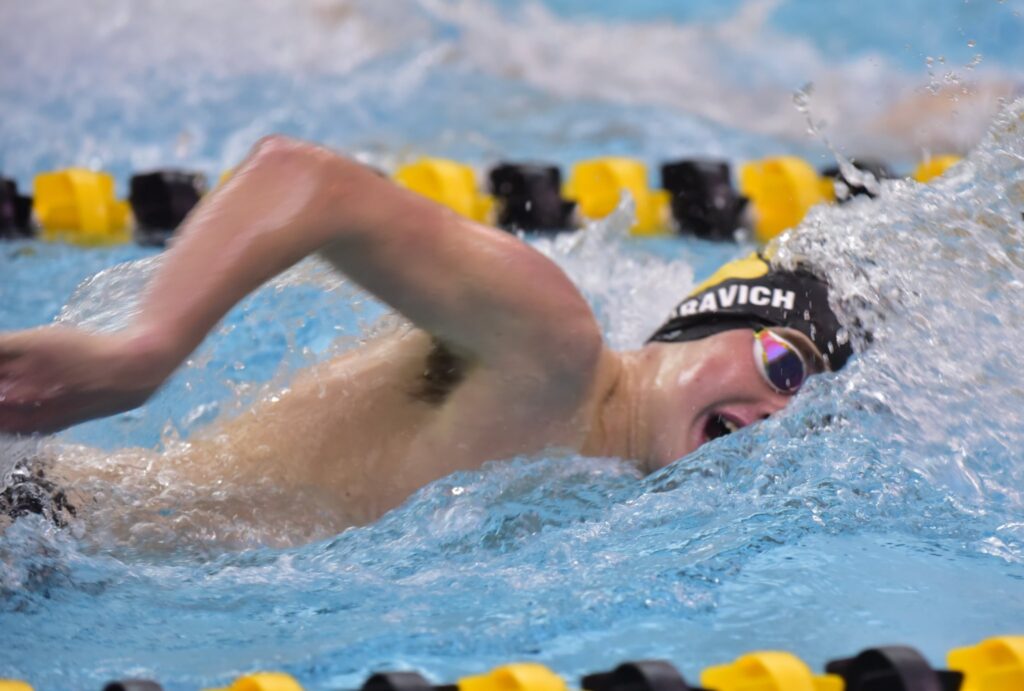 With the top spot in the section at stake, undefeated rivals North Allegheny and Seneca Valley went at it in a highly anticipated meet in Wexford. After North Allegheny’s girls opened with 102-79 win, the Raiders earned a split in the tight nightcap by a score of 94-92.

The divers got things underway and the Tigers took four of the top six spots. Christina Shi (292.95), Maya Ennis (269.15) and Zoe Ky (219.50) finished 1-2-3 for the girls. On the boy’s side, sophomore Will Schenk continued his impressive season with a first-place finish and a score of 257.50. Schenk has finished first in every boy’s dive competition this year. Seneca Valley’s Trevor Elliott and Matt Laslavic took the second and third spots with senior Lucas Rodgers finishing fourth with a score of 203.05.

The girls opened the swimming portion of the meet and the NA relay team of Molly Smyers, Olivia Kisow, Ella Ogden and Quinn Frost took the 200 Medley Relay with a time of 1:45.76. The Raiders Abby Perry won the 200-yard free with Kara Mihm finishing second. The Tigers would win the next seven races. Molly Smyers (2:04.97) and Natalie Sens (23.96) took the 200-IM and the 50-yard free. Frost and Greta Mott made it a sweep in the night’s fastest race. Smyers and Ogden added to their victory totals with wins in the 100-fly and 100-free. Lexi Sundgren and Kisow finished 1-2 in the 500-free and Ogden, Frost, Sens and Sundgren captured the 200-yard free relay with a time of 1:42.27. Seneca’s Ria Dietz won the 100-back, but Mott and Vivien Li finished second and third. Seneca Valley swept the 100-breast and the 400-yard freestyle to finish the girl’s races.

The Tigers boys expected a battle and they got one from a tough Raiders team. North Allegheny started off well, winning the 200-yard Medley Relay with a time of 1:36.61 for the team of William Gao, Jacob McCarren, Tim Compton, and Matt Turzai. Seneca Valley would win the next four races, capturing the 200-free, the 200-IM, the 50-free and the 100-fly. Zack Jubeck and Tyler Tieppo placed second and third in the 200-free, while Gao, Jacob Yarosz and David Shi finished 2 through 4 in the 200-IM. McCarren & Turzai, and Compton & Tieppo were 2nd and 3rd in the 50-free and the 100-fly. Eliot Maravich swam to an impressive victory in the 500-free with a time of 4:51.91. Jubeck and Compton followed him to the wall, respectively. Seneca Valley took the 200-free relay, but Gao responded by winning the 100-back with a time of 53.69. Haihan Shu outdueled McCarran in the 100-breast by .48 and Seneca Valley sealed the win by placing first and second in the 400-free relay. The Raiders boys remained perfect on the season with the win, while the loss was the first for the Tigers boys.

Congratulations to Zoe Ky, Natalie Sens and William Gao as the underclassmen earned honors as the Wright Automotive Players of the Meet. Ky, the sophomore, dove extremely well. What was most impressive in her third-place finish was that she shrugged off a zero score for an incorrect second dive and still joined the 200-club on the evening. The freshman Sens and Gao were equally impressive in their performances. Sens set the top WPIAL time for the season to date in the 50-free at 23.96. She also finished third in the 100-fly and was on the winning team in the 200-free relay. Gao’s team finished first in the opening boys’ race, the 200-Medlay Relay. Gao took second in the 200-IM, won the 100-back with a time of 53.69 and his team earned third place in the night’s last race, the 400-free relay.

The Tigers will not have to wait long to hit the water again. They will host Mars in a section meet on Thursday which will be video streamed live on the North Allegheny Sports Network.