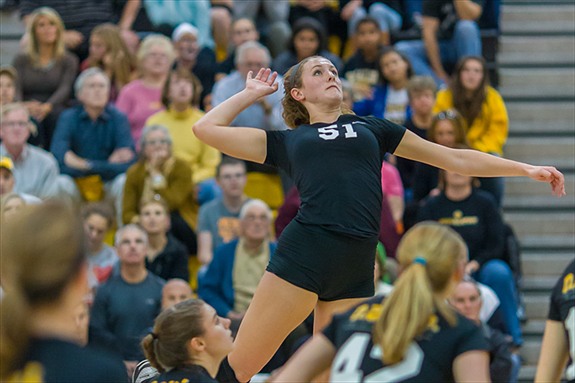 The top-seeded North Allegheny Tigers defeated the Hempfield Spartans, 3-0, on Tuesday night and will advance to the WPIAL Class AAA semifinals. Scores of the sets were 27-25, 25-18, 25-17.

The Tigers got off to a slow start after a long lay-off due to the first round bye they received for the playoffs.  Hempfield hung around with the Tigers all game long as NA never led by more than three points. The Spartans received strong play from Maddie Holmbers while the Tigers Danielle Wall and Erin Swartz had four kills and Ashley Leto and Meg Morningstar had three kills apiece.

The Spartans hung tough in game two as well, with neither team leading by more than two points.  The Tigers led 15-13, and the strong play from Wall and setter Beth Muhlenkamp increased the lead and carried NA to victory. In set three, the depth and height took over as the Tigers pulled away midway through to complete the sweep.  Finishing with nine kills and three aces, Danielle Wall was named the Wright Automotive player of the game for her performance.

The Tigers will now face the Norwin Knights in the WPIAL semifinals on Thursday night.  You will be able to listen to the match right here on the North Allegheny Sports Network and the MSA Sports network. Start time is slated for 7:30 pm from Chartiers Valley High School.