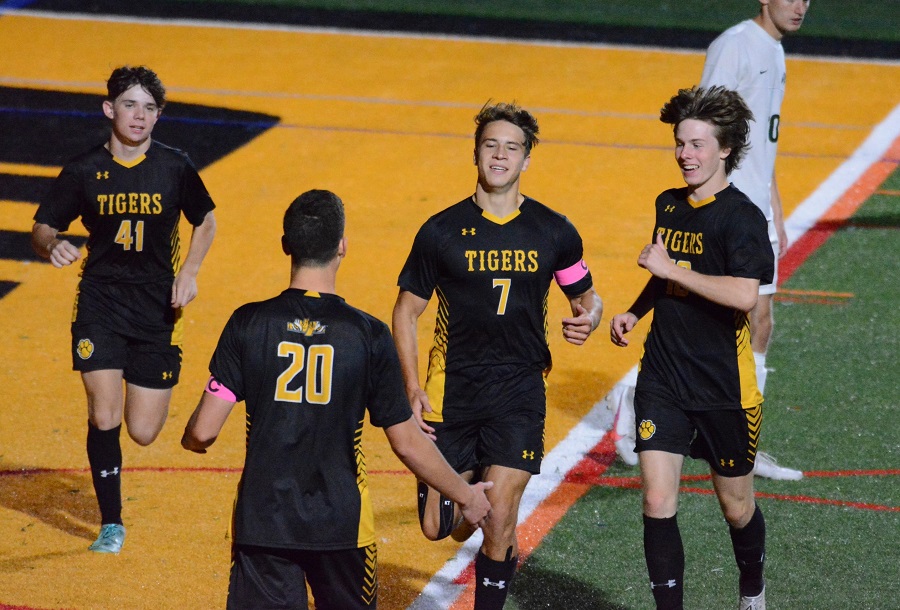 In a critical section matchup with Pine-Richland on Wednesday night at Newman Stadium, the North Allegheny boys’ soccer team earned an important 4-2 victory over the rival Rams. The win atones for an earlier loss to Pine-Richland on Sept. 9 and vaults NA into a three-way tie for second place in the Section 1-AAAA standings. The Tigers have won five of their last six games following an 0-2 start in section play.

North Allegheny wasted little time jumping on Pine-Richland and took advantage of some deft passing for the game’s first goal. Junior Gabriel Gotz fed a pass to senior Matt Mihm, who angled into the left corner before applying a crossing pass to senior Evan Anderson for a header goal and a 1-0 lead. Anderson’s goal came just 3:57 into the game.

Pine-Richland evened the score with 30:05 remaining in the first half when Colin Zvejnieks scored on a penalty kick, tying the game at 1-1. Less than three minutes later, the Tigers regained the lead on a highlight reel connection between Anderson and Mihm. A no-look, heel-kick pass by Anderson down the left wing hit Mihm in stride, who then buried a shot past Pine-Richland goalie Evan Dougal from a sharp angle giving NA the lead back, 2-1.

The score remained 2-1, Tigers, before Anderson helped NA pull away in the second half. Just 2:05 into the second half, Anderson scored his second of the night to increase the Tigers lead to 3-1. With 31:51 remaining in the half, senior Brandon Marzula played a corner kick toward the right post that found the foot of Anderson for a hat trick and a 4-1 advantage. With three goals on the night, Anderson increased his team-leading tally to 14 on the season. Anderson has scored at least one goal in all but two games this season and was named the Wright Automotive Player of the Game for his efforts on Wednesday night.

Pine-Richland struggled to get much going against NA and was issued four yellow cards in the second half. Despite a frustrating night, the Rams went out with a bang as sophomore Nathan Bang scored the final goal of the evening to bring the final score to 4-2, Tigers.

North Allegheny improves to 7-3 overall and 5-3 in Section 1-AAAA. Pine-Richland dips to 4-4-2 overall and 3-4 in the section. The Tigers hope to continue their hot streak with a road matchup with Butler on Tuesday night.