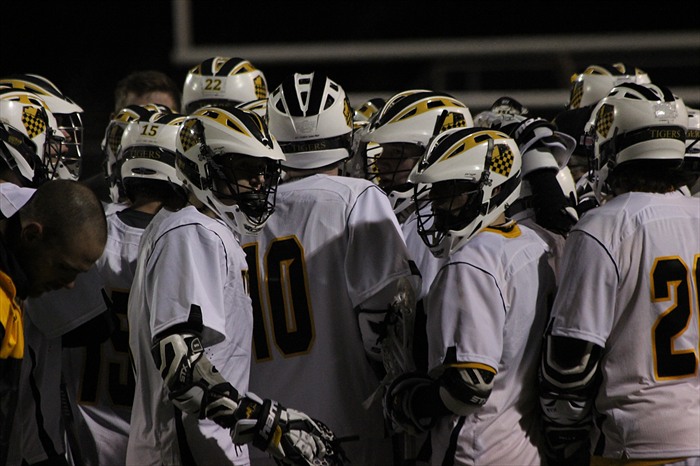 NA Holds on to 4-3 Win Over Shadyside Academy

The North Allegheny Tigers Lacrosse team battled Shadyside Academy in an exciting contest last night at home.  The Tigers took a 1-0 lead in the first when Zech Nachazel set up Teddy Ednaczyk for the goal.  Minutes late Shadyside answered to tie the game and the first period ended 1-1. With under 2 minutes to play in the second period Shadyside took a 2-1 lead however the Tigers quickly responded.  Kyle Rullan hit Dillon Dugan with a pass who put the ball in the back of the net to tie the game and the half time score was knotted at 2.

The Tigers came out of the half aggressive and Rullan put away an unassisted goal to give the Tigers the lead. Shortly before the third period would end, Shadyside locked the score at 3.  Some freshman heroics would give the Tigers the lead in the fourth and seal the victory when Wes Powell took a pass from Rullan and buried the game winning goal. Both teams keepers tallied 7 saves but it was the Tigers victorious in the end 4-3.

The Tigers will be back in action tomorrow night when they host Hampton at 7:30 pm.