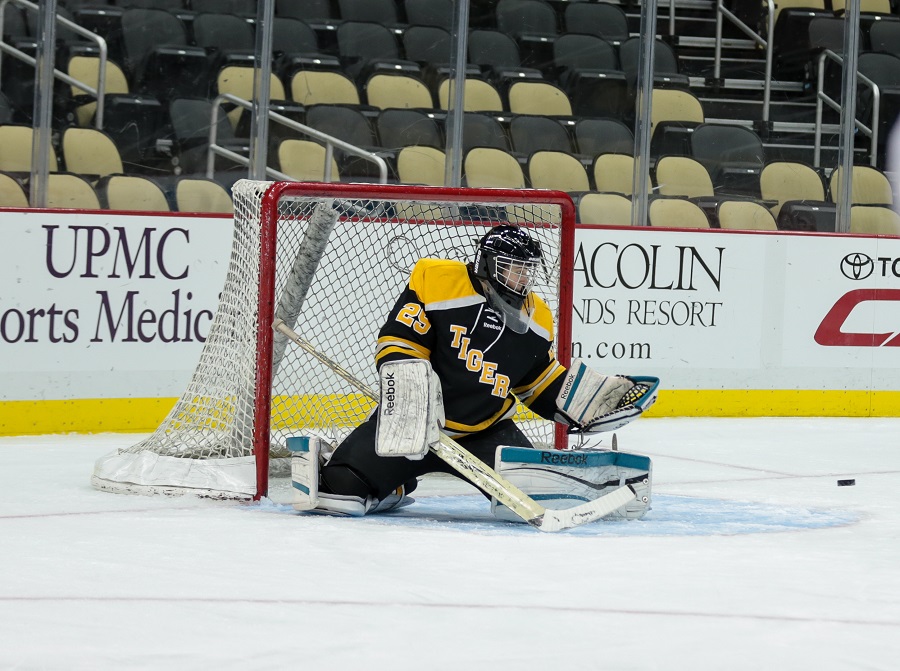 The reigning PIHL and Pennsylvania Cup champions opened the 2013-14 regular season on Thursday night and pummeled the Canon-McMillan Big Macs, 5-0, at the Iceoplex in Southpointe. En route to their state championship a year ago, North Allegheny defeated Canon-McMillan in overtime, 2-1, in the PIHL quarterfinals.  The Tigers gave the Big Macs little opportunity for revenge in the rematch by jumping out to a 3-0 first period lead and never looking back.

North Allegheny used the power play to grab early command of the game as Marty Hubert and William Rahenkamp scored two man-advantage markers in just over five minutes into the contest to put the Tigers ahead, 2-0.  Tyler Wilson added an even strength goal at the 10:18 mark of the period courtesy of an assist from Daniel Bostedo to make it 3-0, Tigers.

In the second period, Dominick Zangaro ballooned the NA lead to 4-0 and Hubert scored the final goal of the night with less than two minutes to play in the third period to put the game on ice, 5-0. In net, Bradford Thornburgh made 21 saves for the shutout. Big Macs goalie Ryan Christian collected 20 saves on 25 shots.

North Allegheny starts the season with a 1-0 mark while Canon-McMillan falls to 1-1.  In a rematch of last year’s Penguins Cup Final, the Tigers face the Peters Township Indians at Southpointe on Thursday, November 6.  Start time is slated for 8:50 pm.