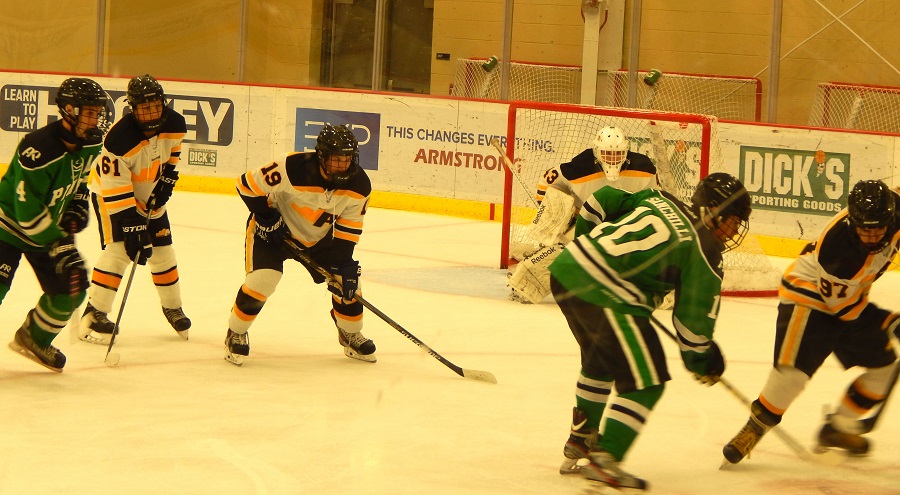 The North Allegheny ice hockey team opened the season at the brand new UPMC Mario Lemieux Sports Complex in style with a thrilling 4-2 victory over the Pine-Richland Rams on Monday night. In the night cap of a high school doubleheader at the new facility in Cranberry, the Tigers rallied from an early 2-0 deficit for the two-goal win.

The Tigers, who were the 2014-15 regular season champions in Class AAA with a 16-2-4 record, fell behind in the season opener thanks to first period goals by Christopher Jenkins and Nate Carnovale. The Carnovale goal came on the power play and gave Pine-Richland a 2-0 lead with 2:59 remaining in the opening stanza.

After a scoreless second period, the Tigers offense sprung to life in the third period with a four-goal outburst. Cameron Sunseri sparked the comeback with a goal 4:41 into the third period to cut the PR lead to 2-1. With less than seven minutes remaining, North Allegheny tied the game when Sunseri fed John Parks for a goal and the score was evened, 2-2.

The Tigers’ team leader in goals last season with 16, forward Erik Chidester got hot in the waning minutes of the game and gave NA a 3-2 lead with a goal with 5:06 to play. Chidester capped the scoring with an empty net goal with just three second remaining to bring the score to its final, 4-2, Tigers.

North Allegheny starts the 2015-16 season with a 1-0 record while Pine-Richland begins at 0-1. The Tigers return to action next Monday night with a home meeting with the Shaler Titans. Face off is slated for 9:00 pm in Warrendale.