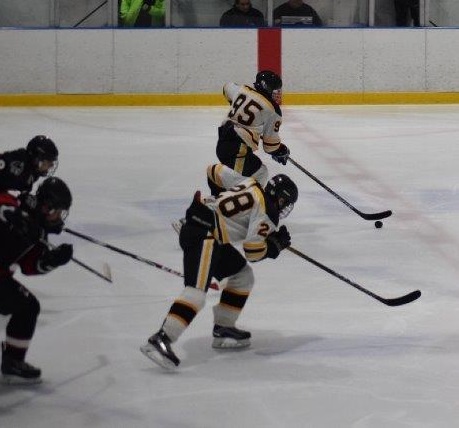 North Allegheny atoned for an early season loss to Upper St. Clair with a 4-3 triumph over the Panthers at the Ice Castle on Monday night. Senior John Parks netted two goals for the Tigers and junior goalie Ryan Heil made 20 saves to earn the victory in net.  Since falling to the Panthers on October 24, the Tigers have won six of their last seven games.

Parks’ first goal of the night gave the Tigers a 1-0 lead at the 8:55 mark of the first period. However, Upper St. Clair took a 2-1 lead into the second period thanks to goals by William Gavett and Joseph Pulit.

North Allegheny answered for two goals in the second period when Tyler Lamark and Parks tallied markers to put the Tigers in front, 3-2. Parks’ goal was a shorthanded marker with just two seconds left in the period.

NA added on midway through the third period courtesy of an Erik Chidester goal to bring the score to 4-2, Tigers. Refusing to go away quietly, Upper St. Clair cut the score to 4-3 thanks to an Elliot Stevenson goal with 3:22 remaining in regulation. The Panthers got no closer as the Tigers closed out a one-goal victory to remain in first place in the Class AAA standings.

North Allegheny improves to 8-2-1 on the season, while Upper St. Clair slips to 2-9-1. The Tigers will visit Pittsburgh Central Catholic on Tuesday, January 3 at 7:00 p.m.