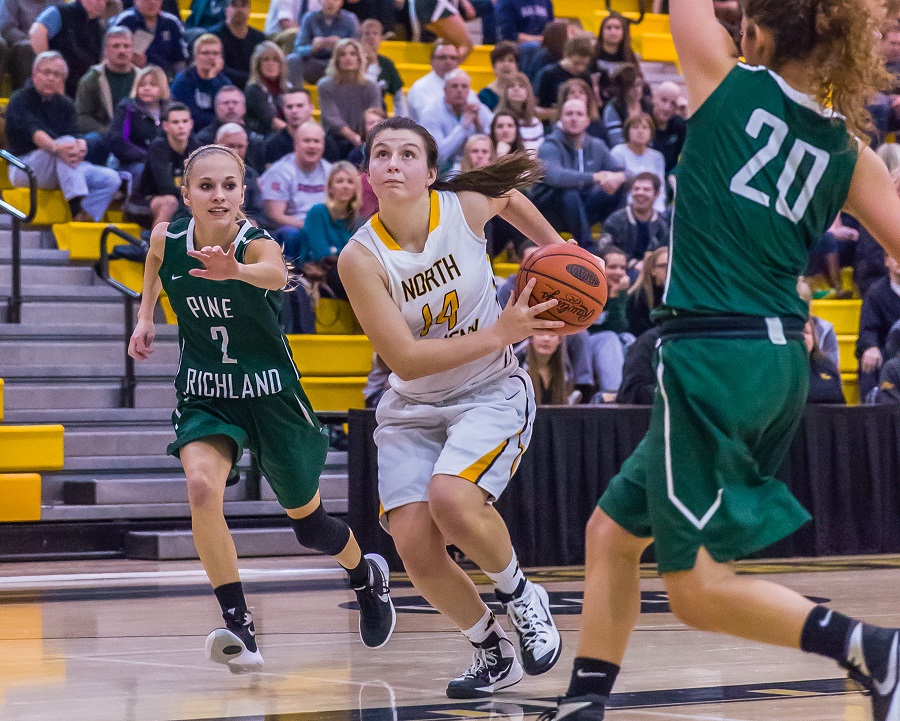 In a complete team effort, the North Allegheny girls’ basketball team knocked the Pine-Richland Rams from the ranks of the unbeaten with a 55-49 road win on Thursday night. The win atones for NA’s only loss of the season to Pine-Richland on January 5 by a 50-47 decision. The Tigers have won 15 of the last 19 games against the Rams.

In the first meeting between these two teams, it was Pine-Richland who raced to an early lead. In the rematch on Thursday night, North Allegheny used a 9-0 run to take a 19-9 lead early in the second quarter. The run was sparked by a stingy defense that created turnovers and turned them into points. Senior Hailey Zeise was the catalyst with four steals in the first half and six for the game. Another key figure on defense was sophomore Brynn Serbin who played exceptionally well and was glued to Pine-Richland standout Amanda Kalin most of the game.

Along with the defense, the Tigers used the 3-point shooting prowess of Piper Morningstar and Rachel Martindale to open up the 10-point lead. Morningstar knocked down three treys on the night in a 13-point performance, and Martindale buried three shots from beyond the arc in the first half.

Despite the early NA advantage, Pine-Richland charged back and took a 26-25 lead with less than a minute remaining in the half. North Allegheny answered with a Martindale 3-pointer to take a 28-26 lead into the locker room at intermission.

Playing from behind most of the night, Pine-Richland managed to tie the game, 31-31, in the early stages of the third quarter courtesy of a 3-pointer by senior Makenzie Jenkins who totaled 17 points for the Rams. However, the Rams could not overtake the Tigers on this night. Thanks in part to Kalin who tallied a game-high 24 points, Pine-Richland did stay close with NA and trailed 43-42 late in the fourth quarter.

North Allegheny stretched out the lead on back-to-back buckets by Zeise, who netted 13 points, and junior Madelyn Fischer to increase the lead to 47-42. With just under a minute remaining, the Rams chose to foul the Tigers and  hoped that some missed free throws would follow. However, the misses never came as Martindale poured in 6 of 6 free throws and Fischer drained 2 of 2 attempts from the charity stripe in the final minute of the game. With a team-high 21 points and eight rebounds, Martindale was named the Wright Automotive Player of the Game.

The win pulls North Allegheny into a first-place tie with Pine-Richland atop the Section 1-AAAAAA standings as both teams sit at 17-1 overall and 6-1 in section play. The Tigers will host Seneca Valley on Tuesday night in a game that will be broadcast live via the internet on the North Allegheny Sports Network.