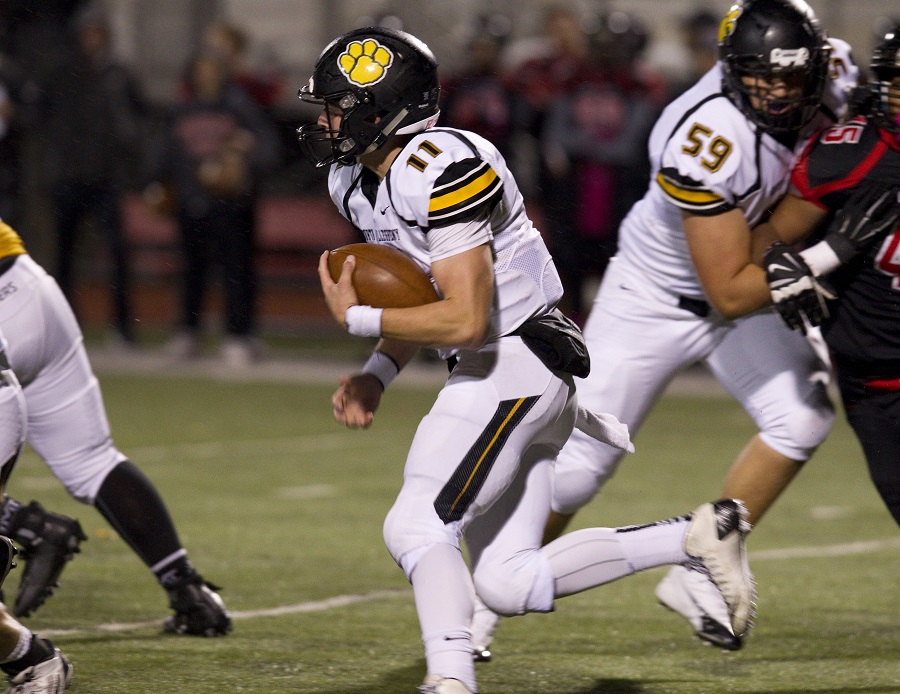 North Allegheny won its fifth in a row and prevailed over the Fox Chapel Foxes on Friday night, 56-6, clinching a playoff berth in the WPIAL playoffs. The Tigers used their big-play offense to throttle the Foxes with four touchdowns coming from 34 yards or longer. Senior quarterback Riley Trueman scored three touchdowns in the rout, including two rushing and one passing touchdown. Leading all ball carriers with 97 yards rushing, Trueman was named the Wright Automotive Player of the Game.

While the Tigers dialed up plenty of long-distance touchdowns on this night, North Allegheny started the game with a 9-play, 65-yard drive that was punctuated on Trueman’s first score of the night, a 1-yard quarterback sneak to give the Tigers a 7-0 lead. Fox Chapel fumbled the ensuing kickoff and four plays later Michael Pope scored on a 2-yard run to bring the score to 14-0 with 6:57 left in the first quarter. Late in the first quarter, Trueman galloped for a 70-yard touchdown run to give the Tigers a 21-0 lead.

Fox Chapel moved the ball well on their next possession and drove to the NA 8-yard line where the Foxes were faced with a 4th and 6.  Quarterback Dimitri Spina’s end zone pass was intercepted by Trueman and returned 66 yards to the Fox Chapel 34-yard line.  On the next play, Ethan Maenza tossed a 34-yard scoring strike to a wide open Matt Sell for a 28-0 Tigers lead with 9:17 remaining in the second quarter.

The Foxes’ next possession also ended on an interception, this time on a pick by Niko Mermigas at the Fox Chapel 41-yard line.  Moments later, Trueman hit tight end Griffin Sestilli for a 26-yard touchdown pass and a 35-0 lead. The Tigers tacked one more score before halftime when Maenza burned the Foxes for a 41-yard touchdown run and a 42-0 advantage.

North Allegheny improves to 6-1 overall and 5-1 in the Northern Eight Conference. Fox Chapel remains winless with an 0-7 overall record and 0-6 mark in conference play. The Tigers will host Latrobe next week in a non-conference affair at Newman Stadium.