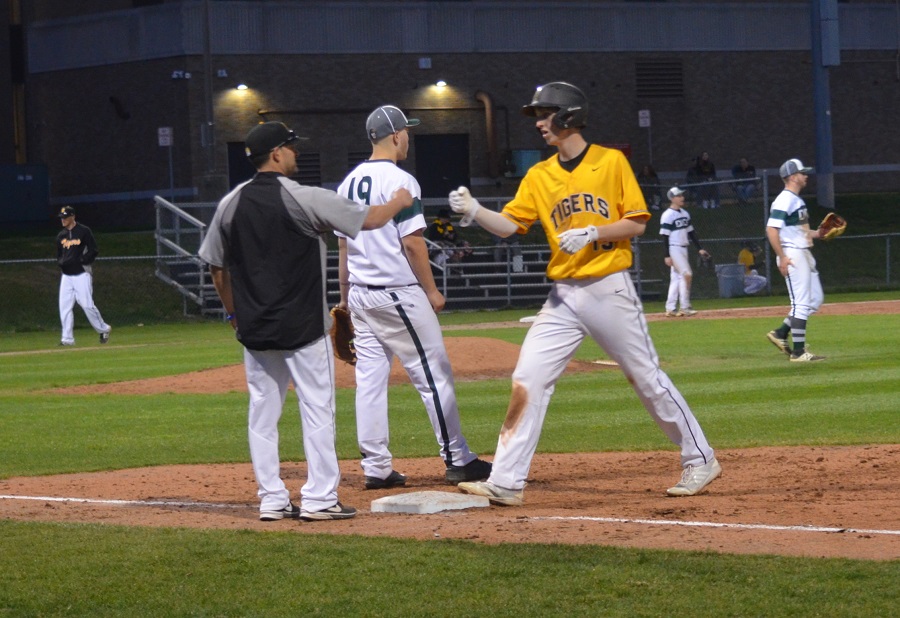 NA Offense Breaks Out Against Allderdice For Section Win, 10-2

Behind a 13-hit attack, the North Allegheny baseball team ambushed the Allerdice Dragons on Tuesday night, 10-2. In a scoreless tie through three innings, the Tigers broke the Section 1-6A contest wide open with all 10 of their runs coming in innings four through six.

Four Tigers posted multi-hit days, including senior Anthony Hattrup’s 3 for 3 performance with one run and one RBI. Logan Andreyko, Cole Young and Anthony DiRenzo all provided two hits each.

The Tigers increased the advantage to 5-0 in the bottom of the fifth inning on a two-out, two-run double by Cam Medic. Medic ended the day with a team-best three RBI’s.

Allderdice gained some temporary momentum with a two-run top of the sixth inning, including an RBI single from Wilton Rouse, trimming the score to 5-2.

North Allegheny put the game away with five runs in the bottom of the sixth, highlighted by a two-run single from Trevor Freyvogel, to complete a 10-2 section win.

NA pitcher Ryan Partridge silenced Allderdice most of the night, allowing a scant three hits and two runs with nine strikeouts and no walks. Jacob Barca allowed all 10 runs (five earned) in five innings of work, taking the loss for the Dragons.

North Allegheny improves to 7-4 overall and 3-1 in Section 1-6A. Allderdice remains winless in section play at 0-4 and sits at 2-4 overall. The Tigers will take on archrival Pine-Richland on Wednesday afternoon at 4:00 p.m.