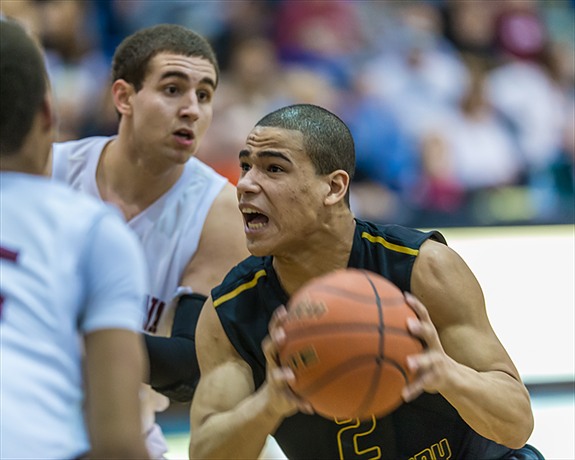 North Allegheny forced District 6 champion Altoona into 22 turnovers as the quick-footed Tigers outran the Mountain Lions on Saturday evening, 82-57, in the opening round of the PIAA playoffs. North Allegheny won the steal category, 13-1, and never allowed the much taller Mountain Lions to benefit from their height advantage.

In the first quarter Altoona seemed poised against the NA press, but the Tigers stretched an eight point lead after one period into a 19 point lead by halftime.  While the Mountain Lions were chasing their tail, the Tigers fired in a bevy of three-pointers in the first half, including four from sharpshooter Joe Mancini.  A major contributor on offense and defense, the senior guard tallied 15 points and four steals. For his efforts, Mancini was named the Wright Automotive Player of the Game.

In the second quarter, North Allegheny gained control of the game with a 10-1 run that opened up a 37-21 lead for the black and gold.  Along with Mancini’s exterior shooting, the interior drives and touch of junior Cole Constantino helped the Tigers swell the lead.  Constantino finished with 15 points, scoring 13 of which in the first half.

The Tigers bottled up Altoona’s 6-4 senior forward, Manny Span, throughout much of the day. Span had only five points at the half and one field goal as the Mountain Lions trailed 48-29 at intermission. If not for the Mountain Lions free-throw shooting, the game might have been a blowout even sooner. Altoona was 15 of 20 from the free-throw line in the first half, with 6-6 junior Jermaine Samuel leading the way with 8 of 9 shooting from the charity stripe.

While the Mountain Lions hung around with their free-throw shooting in the first half, North Allegheny put the game away early in the fourth quarter with a 10-0 run that opened up a 30 point lead for the Tigers, 72-42. Elijah Zeise, Will Sandherr and David Haus led the charge in the second half. Zeise scored 10 points and was matched up with Span and the other Altoona big men on defense. Sandherr netted 11 points and Haus collected nine points, seven boards, five assists, and three steals.

Not until the game was firmly in North Allegheny’s control did the big men of Altoona finally make an impact, but by then it was too little, too late. Tony Acrie, a 6-3 senior, tallied a game-high 19 points and 13 rebounds. Span scored 12 points and collected 10 rebounds. Altoona held the rebounding edge, crashing the glass for 34 boards to NA’s 21.

With the win, North Allegheny improves to 22-4 and will get a third crack at the WPIAL champion New Castle Red Hurricanes. Altoona’s season ends with its 37th District 6 title and an overall mark of 13-10.

For a photo gallery of NA’s game vs. Altoona courtesy of photographer J.J. LaBella, click here.