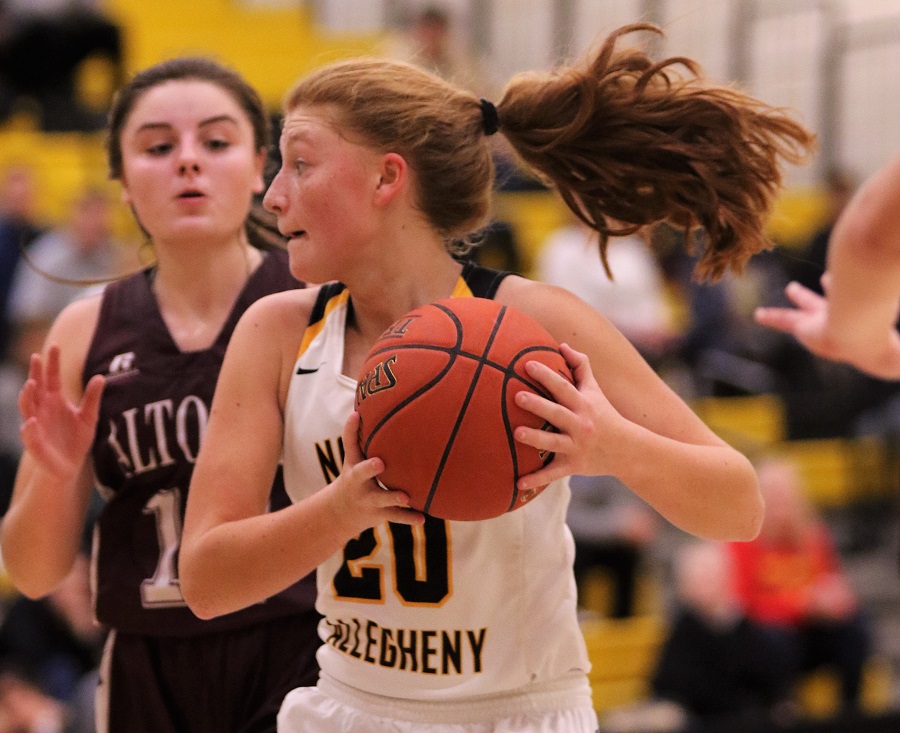 At the Wright Automotive Holiday Tournament, the North Allegheny girls’ basketball team claimed a 62-56 win over the Altoona Mountain Lions on Friday afternoon. The Tigers built a 24-point lead in the first half and fended off a furious rally from the Mountain Lions in the second half for the non-section win.

The last time these teams met, North Allegheny outlasted Altoona for a 55-50 win in the second round of the 2018 PIAA playoffs. In the rematch, the Tigers flustered the Lions with their pressure defense and rolled to a 31-7 lead by the early stages of the second quarter. Leading the charge were Lizzy Groetsch and Emma Fischer who each netted 14 points on the day. Fischer knocked down three 3-pointers in the first quarter and was named the Wright Automotive Player of the Game.

Trailing by 24 points, Altoona finally settled in against the NA pressure and used a 9-0 run to climb back into the game, trailing 31-16. By halftime, the Mountain Lions had cut the score to 38-27.

In the third quarter, Altoona got as close as six points of the Tigers before NA went on 12-3 run to end the period. The Tigers perimeter shooting of Fischer and Abby Glass, who finished with six points on a pair of treys, fueled the NA run.

Once more, North Allegheny responded to the Altoona rally and finished off the Mountain Lions in the final minute for a 62-56 victory.

With the win, North Allegheny improves to 6-0 on the season. Altoona drops to 4-3 on the campaign. The Tigers return to section on Jan. 2 with a visit to Norwin at 7:30 p.m. The game will be broadcast live as the Big 56 Conference Game of the Week. Randy Gore and Jonathan Spina will have the call.