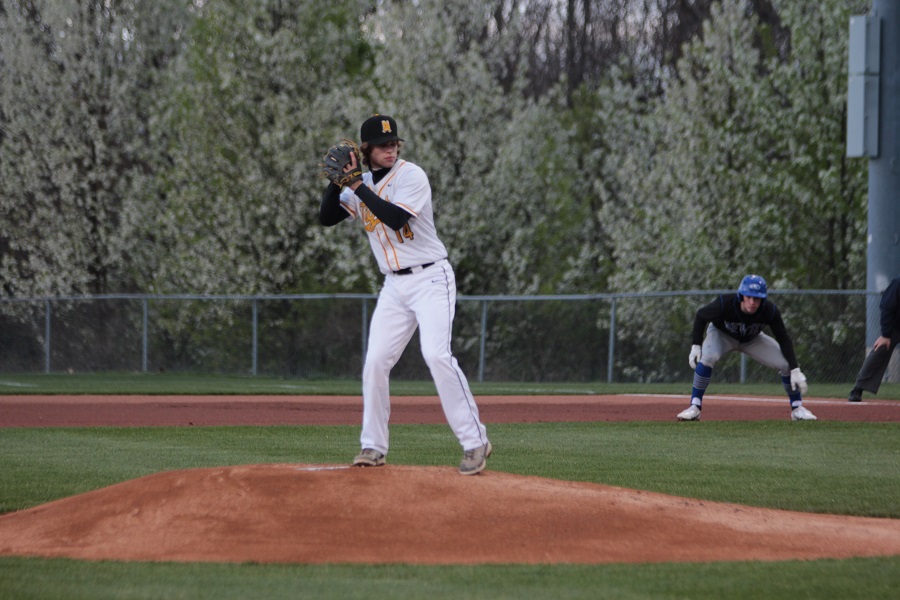 On a cold and soggy night at North Allegheny, the host Tigers sidestepped the rain drops and the Mt. Lebanon Blue Devils on Thursday night for an 11-4 win in six innings.

Under substantial rain fall in the bottom of the fifth, the Tigers broke open a close game with a six-run inning to leave the Blue Devils in their wake. The big inning was keyed on a wild pitch that scored two runs and an RBI double by Aaron Galaska, who also finished with two RBI and two runs scored on the evening. For his efforts, including 4.2 innings on the mound to earn the win, Galaska was named the Wright Automotive Player of the Game.

Trailing 2-0 in the bottom of the second inning, Aaron Posey got North Allegheny on the scoreboard with an RBI groundout to plate Matt Ranallo to trim the deficit to 2-1. Defensively, Posey impressively threw out two baserunners. Heading into the game, Mt. Lebanon had successfully stolen 19 of 22 bases.

In the third inning, Ethan Gavlik tied the game with a sacrifice fly and NA took a 3-2 lead moments later when Erik Sundgren raced home on Mt. Lebanon error. The NA advantage swelled to 4-2 when Cole Young crushed a solo homer that sailed over the right field fence for his second round tripper of the season.

An RBI groundout by Galaska expanded the lead to 5-2 in the fourth inning as the rain started to fall at NASH. Despite a two-run top of the fifth by the Blue Devils, the Tigers took command of the game with a six-run fifth inning to close out a rain-shortened 11-4 win in six innings.

North Allegheny leaps to 7-1 overall with the non-section win. The Tigers are scheduled to host Mars on Friday night at 7:00 p.m. The game will be broadcast live via the internet on the North Allegheny Sports Network.