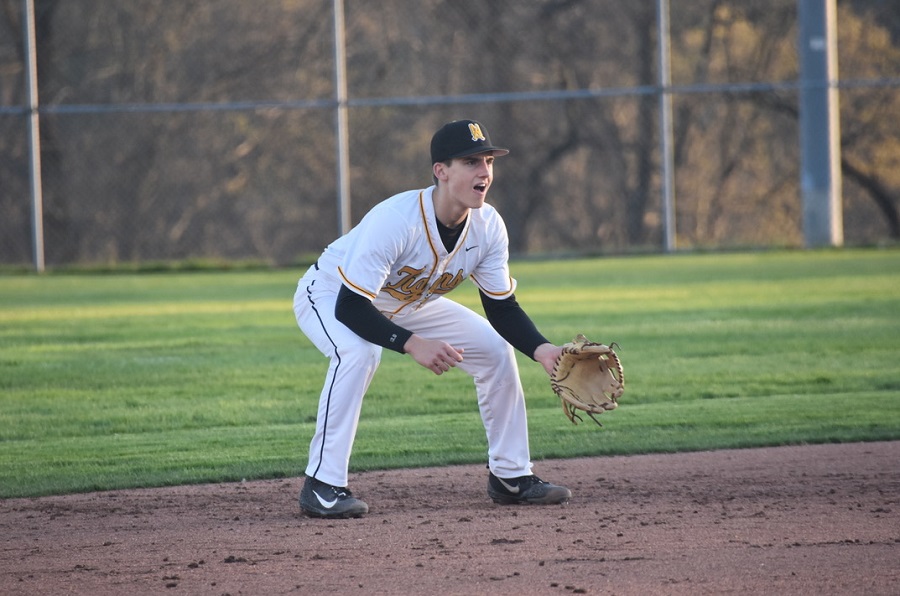 As the North Allegheny baseball team continues its drive toward a third straight appearance in the WPIAL championship game, eight Tigers were honored today by the Big 56 Conference with all-section recognition. Of the eight Tigers named to the Section 1-6A all-section team, three received first-team laurels.

Freshman shortstop Cole Young, sophomore outfielder Logan Andreyko and senior designated hitter C.J. Weller took home first-team honors. Young boasts a .407 batting average with one home run and a team-best 24 RBI. The speedy Andreyko not only patrols centerfield for the Tigers but is also hitting .366 with 15 runs scored and seven RBI. Weller, also the team’s catcher, has the top batting average on the squad and is hitting .426 with seven RBI out of the leadoff spot.

Second-team accolades went to senior second baseman Jared Orwell, and senior pitchers Ryan Partridge and Anthony Hattrup. Orwell is hitting .313 on the campaign with a home run, 12 RBI and 16 runs scored. Partridge and Hattrup both sport records of 4-1 on the season. Partridge has an ERA of 1.70 with 40 strikeouts in 33 innings pitched. Hattrup has a miniscule 1.25 ERA with 27 strikeouts in over 22 innings of work.

Earning Big 56 Conference honorable mention recognition were junior outfielder Ryan Dougherty and junior pitcher Kevin Schott. An excellent leftfielder for NA, Daugherty has a .262 average, 14 runs scored and six RBI.  Like Partridge and Hattrup, Schott also has a sub-two ERA. The southpaw boasts a 1-1 record and a 1.77 ERA with 22 strikeouts in over 27 innings on the bump.

The Tigers are the No. 4 seed in the WPIAL Class 6A playoffs and have a first-round bye.