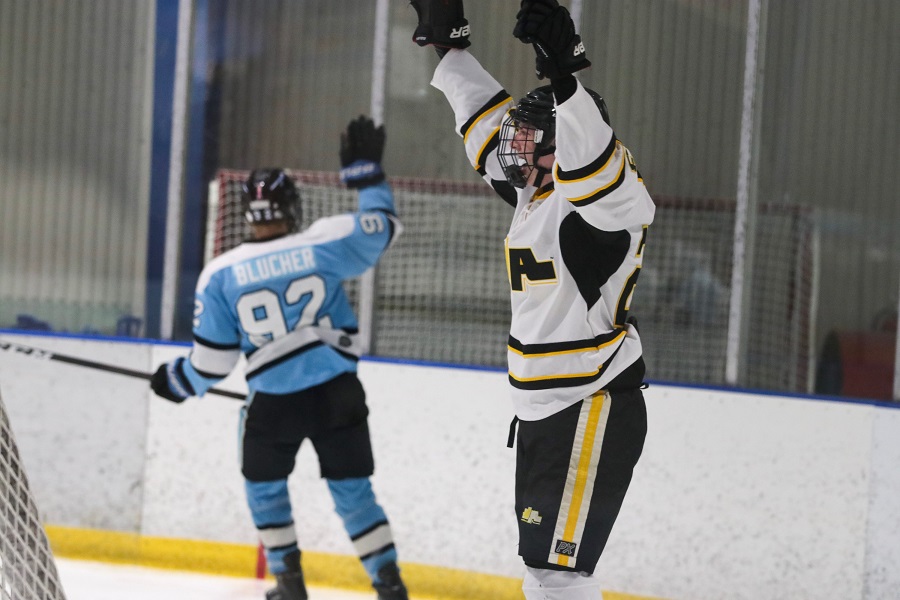 With a complete and convincing all-around performance, the fourth-seeded North Allegheny ice hockey team shutout the fifth-seeded Seneca Valley Raiders on Monday night, 5-0, in the PIHL Class AAA quarterfinals at the Baierl Ice Complex in Warrendale. The Tigers scored 47 seconds into the game to gain control and senior goalie Josh Bailey stopped all 32 shots he faced. Earning his first shutout of the season, Bailey was named the Wright Automotive Player of the Game.

With two narrow victories in the regular season over Seneca Valley, North Allegheny earned their 10th consecutive victory over the Raiders with plenty of room to spare on Monday night. In their first playoff meeting with the Raiders since a 3-2 quarterfinal round win in the 2019 playoffs, the Tigers set the tone early with a 2-on-1 break that led to a Trey Gallo goal just 47 seconds into the contest for an immediate 1-0 lead. The Gallo marker was assisted by Connor Chi and Cole Jackman.

The one-goal lead remained intact until the 6:14 mark of the second period when Gallo struck again with a slap shot from near the blue line that beat SV keeper Zander Stark for a 2-0 lead. Gallo’s second goal was assisted by senior Aaron Mark. Just over two minutes later, the Tigers cashed in on a power play chance courtesy of an Austin Peterson marker, assisted by Nate Spak and Chi, and the NA lead swelled to 3-0.

In the third period, the Tigers put the game on ice with another goal from Peterson and a Matt Irvin tally to close out a 5-0 triumph.

With the win, North Allegheny advances to the PIHL semifinals to take on a familiar playoff foe, the Peters Township Indians. The contest will be played on Monday, April 12 at 6:30 pm at the RMU Island Sports Center.