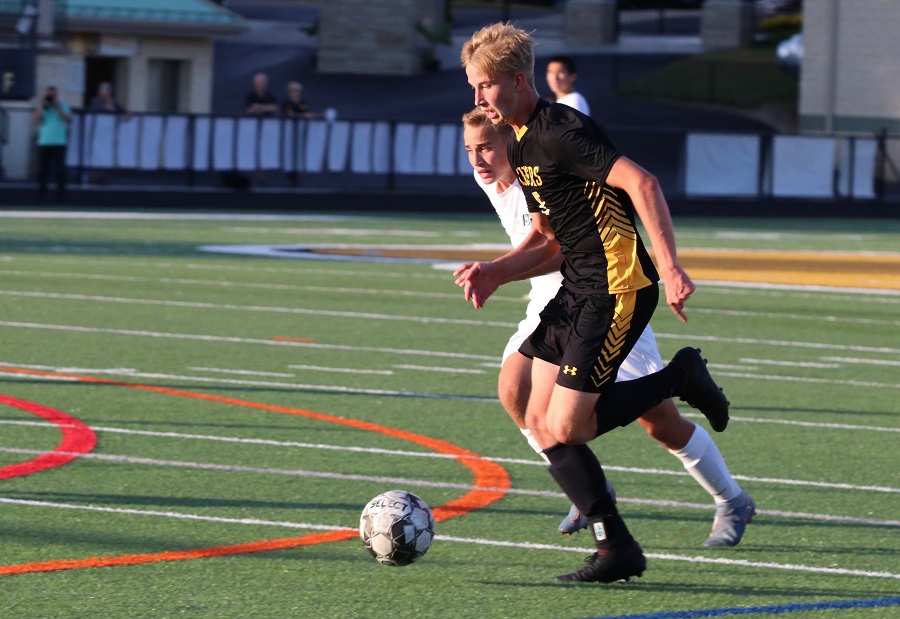 The North Allegheny boys’ soccer team earned an important section win over Pine-Richland on Thursday evening with a 3-1 triumph at Newman Stadium. The win gives NA a 4-3 mark in Section 1-AAAA through the first half of the season and keeps the Tigers on track for a playoff spot.

The Tigers got off to a quick start and aggressively pursued the Pine-Richland net in the early stages of the contest. With 25:21 on the first half clock, senior Sam Passodelis made a terrific move to beat a defender down the right sideline and sent a cross to senior Luke Anderson for a header that beat Pine-Richland goalie Evan Dougal for a 1-0 lead. The goal was Luke Anderson’s first of the season.

The score remained 1-0 until North Allegheny added on with an Evan Anderson goal just 2:20 into the second half. Evan Anderson’s goal, his team-best sixth of the season, advanced the NA advantage to 2-0.

Pine-Richland raised their intensity level in the subsequent minutes as the physicality of the game picked up on both sides. In all, five yellow cards were issued on the evening with three on North Allegheny.

The Rams breathed some life into their comeback hopes with a goal from Vince Roller, his ninth of the year, with 11:13 left in the second half. Pine-Richland’s momentum was short-lived, however, as North Allegheny put the game away with 9:15 remaining. Luke Anderson sent a shot on net that bounced off the left post, but NA’s Phillip Iozzi pounced on the rebound for his first goal on the year and a 3-1 Tigers lead. For scoring one goal and setting up another, Luke Anderson was named the Wright Automotive Player of the Game.

North Allegheny stonewalled Pine-Richland in the remaining minutes for the 3-1 win. Senior goalie Jonathan Partridge earned the win in net for the Tigers.