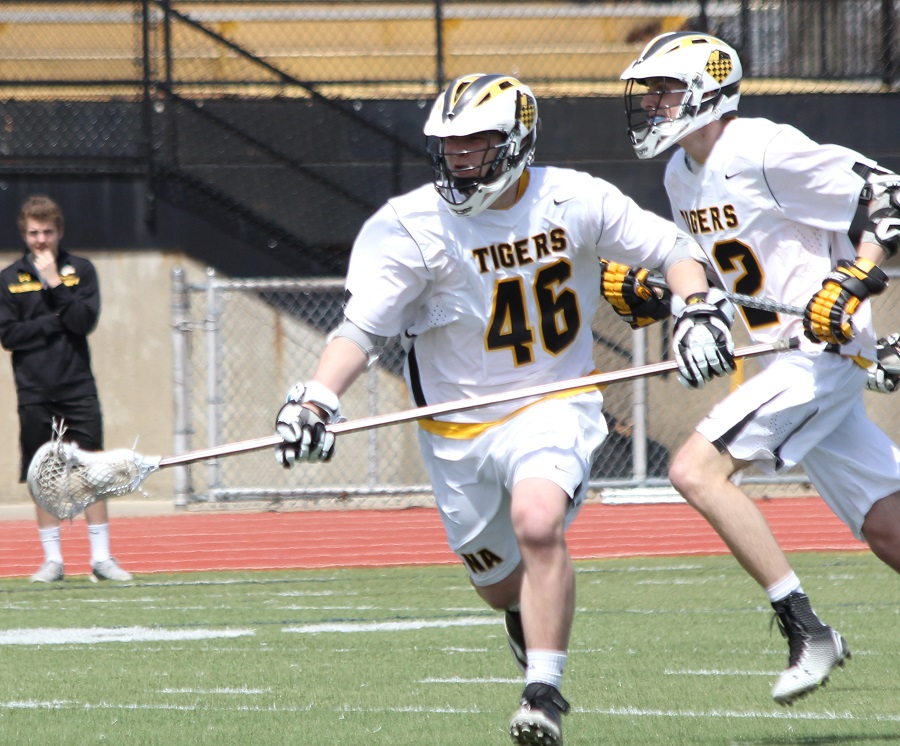 North Allegheny bounced back nicely from an opening night loss to Mt. Lebanon with a convincing 10-5 triumph over the Seneca Valley Raiders on Wednesday night. The Tigers cashed in for four man-up goals and sophomore Wes Powell notched a hat trick to help NA to a Division 1, Section 2 victory.

Powell and the Tigers converted a man-up situation into a 1-0 lead with 6:42 on the clock in the first quarter. The Raiders answered back for a 2-1 lead on back-to-back goals by Tyler Spagnolo and Tee Moriarty. North Allegheny tied the game at 2-2 just before the end of the opening quarter when Jack Kairys launched a long pass to Powell who unleashed a shot from 30-yards out that found its way past SV goalie Brady Moze.

The goal in the waning seconds of the first quarter by Powell gave the Tigers considerable momentum and North Allegheny scored the next five goals of the game to take a commanding 7-2 lead by the end of the third quarter. Peter Barrante and Alec Vissotski scored man-up goals in the second period. Gavin Hagen, Dillon Dugan and Matt Osten all tallied markers in the third period to give the Tigers a five-goal advantage.

While the Tigers built their lead, the NA defense of Kairys and Greg Ferringer held the Seneca Valley attack in check. Ferringer posted an impressive eight forced errors and five ground balls and led the Tigers in both categories. For his efforts, Ferringer was named the Wright Automotive Player of the Game. Also contributing on defense was goalie Ean Kuska who made six saves.

In the fourth quarter, Seneca Valley twice cut the NA lead to three goals but could not come any closer. Powell, Hagen and Kairys all scored third period goals for the Tigers to finish off a 10-5 victory over their section foe.

North Allegheny improves to 1-1 overall and 1-0 in Division 1, Section 2. Seneca Valley falls to 0-1 overall and in section play. The Tigers return to action on Wednesday night at Fox Chapel.