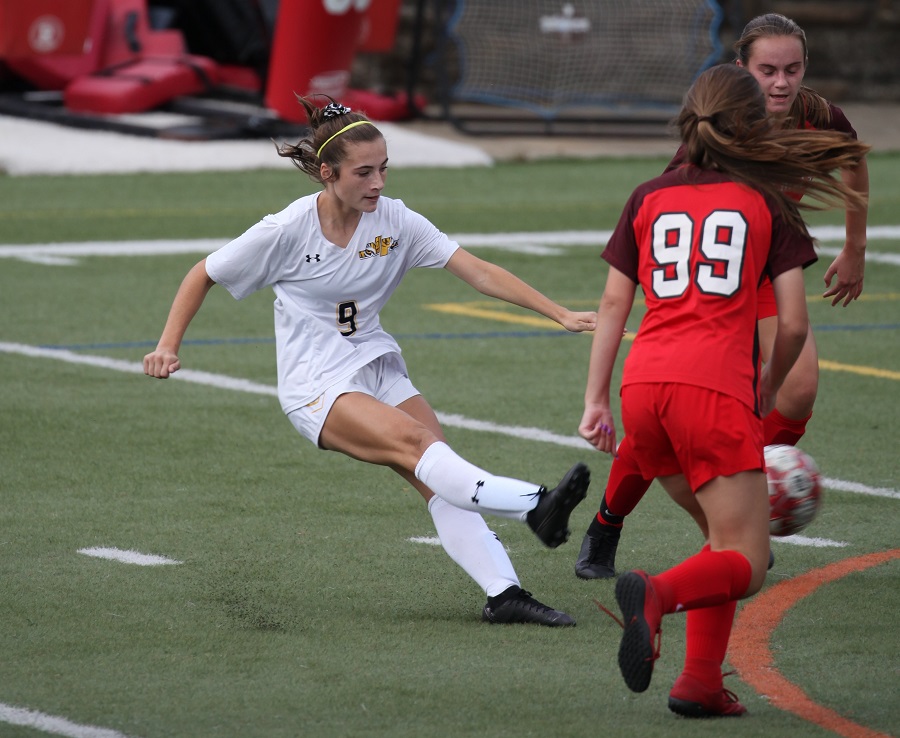 The North Allegheny girls’ soccer team won its third straight game and secured a season sweep of neighborhood rival Pine-Richland on Wednesday night with an 8-1 triumph in Section 1-AAAA action.

On her way to a hat trick, senior forward Sarah Schupansky scored less than two minutes into the game to give the Tigers an immediate 1-0 lead. Schupanksy added another goal at the 23:58 mark of the half for a 2-0 NA advantage.

In the second half, Pine-Richland trimmed the score to 2-1, North Allegheny, when an own goal was scored with 35:29 to play. The PR marker was credited to Megan Donnelly.

Despite the brief setback, the NA offense exploded for six goals in the final 20 minutes of the game. At the 20:31 mark, sophomore Lucia Wells increased the Tigers advantaged to 3-1 and the floodgates were opened. Sophomore Anna Bundy tallied a marker with 18:07 left, followed just over a minute later on another goal by Wells. At 11:13, Schupansky netted her third of the night for 6-1 lead. Freshman Samantha Braden capped the scoring with back-to-back goals at 8:39 and 6:50 on the clock as the Tigers closed out an 8-1 victory.

With the win, North Allegheny jumps to 7-2 overall and 6-1 in Section 1-AAAA. Pine-Richland slides to 4-5-1 and 3-5-1 in the section. The Tigers will faceoff against Butler on Saturday morning at 10:00 am in a showdown for first place in the section.