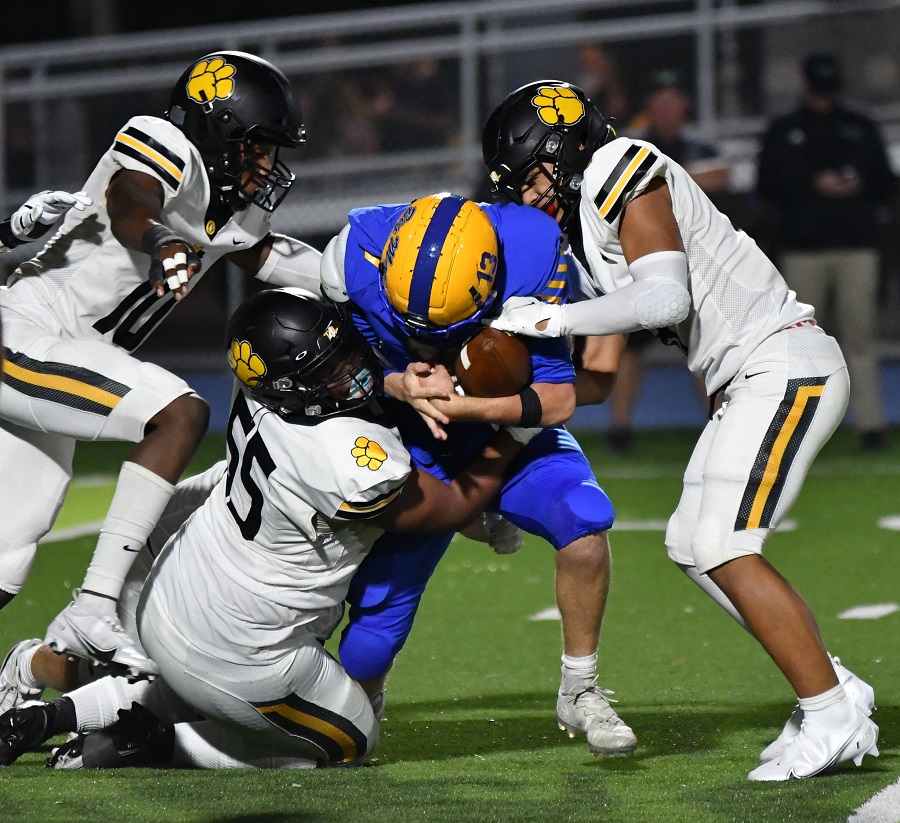 North Allegheny rallied from a 14-0 deficit with 36 unanswered points for a 36-14 win at Canon-McMillan on Friday night in Quad County Conference action. The Tigers defense sacked Big Macs quarterback Mike Evans seven times and forced three turnovers to help secure the victory. With eight tackles and 3.5 sacks, senior defensive end Jacob Porter was selected as the Wright Automotive Player of the Game.

While the North Allegheny defense imposed its will much of the night, it was Canon-McMillan that forced the first turnover of the game with 4:38 remaining in the opening stanza when Treyvon Mullens recovered a fumble at the Tigers 43-yard line. After a sack by Porter and a CM penalty backed up the Big Macs to a 3rd down and 17, Evans connected with receiver Chris Davis for a 40-yard pass to the NA 9-yard line. On the very next play, senior running back Ryan Angott rushed for a 9-yard touchdown to give Canon-McMillan a 7-0 lead with 2:44 left in the first quarter.

On the first play of the second quarter, Evans hit another big pass play when he found receiver Anthony Finney for a 51-yard touchdown and a 14-0 lead for the Big Macs.

North Allegheny regrouped with 7:03 to play in the second quarter with a big play of its own as sophomore quarterback Logan Kushner delivered an accurate deep ball to senior wideout Dwayne Taylor for a 52-yard scoring pass, trimming the deficit to 14-7.

Later in the quarter, after a shanked punt by Canon-McMillan, North Allegheny capitalized on great field position at the CM 24-yard line. Following a 21-yard run by Khiryn Boyd on the first play of the drive, Kushner rushed for a 3-yard touchdown to cut Canon-McMillan’s lead to 14-13. On the PAT, kicker Harron Lee took a direct snap and tossed a pass to tight end Connor Casten for a two-point conversion, vaulting North Allegheny ahead, 15-14, with 3:24 to play before halftime.

On a night with 20 combined punts between the two teams, the defenses took hold in the third quarter. NA was clinging to a one-point lead before the Tigers busted off another big play to increase the advantage. With 3:05 remaining in the third period, Kushner tossed a 70-yard touchdown pass to Boyd for a 22-14 lead. Boyd finished with five receptions for 96 yards, while adding 11 carries for 51 yards rushing in another strong all-around performance. Kushner passed for 169 yards and two touchdowns, to go along with one rushing touchdown.

With Canon-McMillan’s offense held to just 84 yards in the second half, the North Allegheny running game gained control of the contest in the fourth quarter. With 5:45 remaining in the final period, running back J.R. Burton ran around and then through the Big Macs defense on a 49-yard scamper to increase the NA lead to 29-14. Following a fumble recovery by sophomore linebacker Tyree Alualu at the CM 36-yard line, Burton capped an 8-play drive with an 8-yard touchdown run with 1:17 left to bring the final score to 36-14, Tigers. After a frustrating first three quarters that saw Burton held to 0 yards on five carries, the senior tailback flipped the script in the fourth quarter with 77 yards on five carries and two touchdowns.

North Allegheny outgained Canon-McMillan, 306-201, on the night. Hounding and harassing Evans throughout the night, the Tigers defense limited the sophomore signal caller to just 5 of 16 passing for 113 yards, one touchdown and one interception. Taylor intercepted a second quarter pass for his second of the season, while Alualu and Evan Lyon each recovered CM fumbles.

With the win, North Allegheny improves to 5-3 overall and 3-2 in conference play. Canon-McMillan dips to 4-4 overall and 2-3 in the conference. The Tigers will host Hempfield on Senior Night next week.