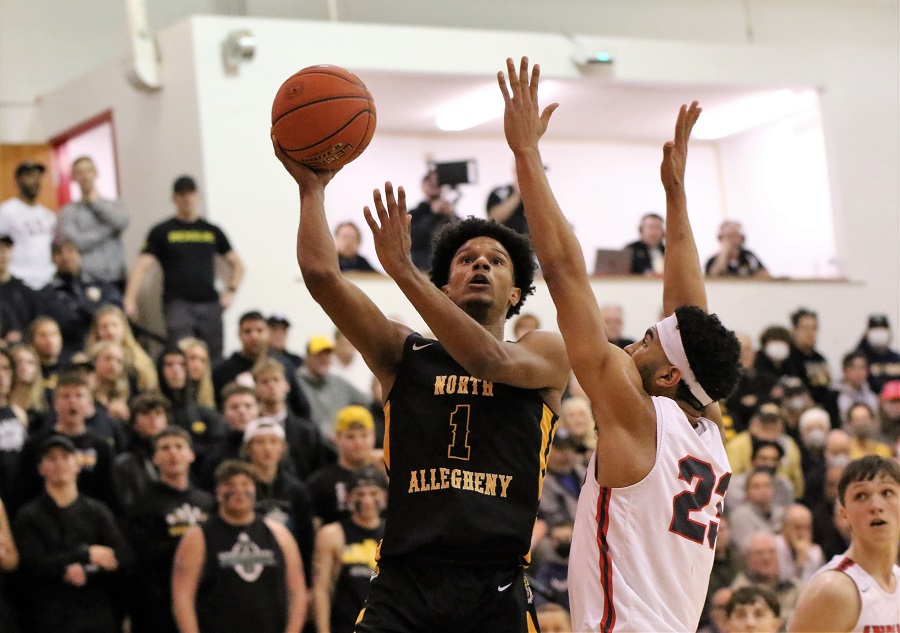 Facing off against the top-ranked North Hills Indians for the fourth time this season, the North Allegheny boys’ basketball dropped a 61-53 decision to its section rival in the WPIAL Class 6A quarterfinals. The Tigers fell behind by 13 points in the third quarter before staging a valiant fourth quarter comeback that came up just short.

In the first quarter, North Allegheny took a 5-4 lead in the first four minutes of the game thanks to a layup by senior Robby Jones and a 3-pointer by senior Kolin Dinkins. However, North Hills went on a 9-0 run for a 13-5 lead and the Indians didn’t trail for the rest of the night.

The duo of senior guard Alex Smith and sophomore forward Royce Parham led the way for the host Indians who held an 18-11 lead after one quarter and a 33-25 advantage by intermission. Smith totaled 21 points and provided stellar defense, while Parham netted a game-high 24 points and provided a looming presence in the paint.

The Indians increased their lead to 46-33 with 3:23 remaining in the third quarter before the Tigers orchestrated their comeback bid. Fueled by senior Kyrell Hutcherson, North Allegheny cut the score to 52-47 with 3:36 remaining in the game. Hutcherson finished with a team-best 17 points off the bench and was named the Wright Automotive Player of the Game. Along with Hutcherson, senior Matt McDonough touched double figures with 10 points on the night.

Despite NA’s best efforts, North Hills managed to stave off the Tigers’ rally and hold on for a 61-53 victory. Parham’s 10-for-14 effort at the free-throw line helped the Indians hang on in the waning minutes.

North Hills remains undefeated with a 23-0 record and advances to the WPIAL semifinals to face Mt. Lebanon. North Allegheny’s season comes to an end with a 15-9 record and a fourth consecutive trip to the WPIAL playoffs, with a second consecutive appearance in the quarterfinal round. Congratulations to head coach Dave DeGregorio and the entire North Allegheny boys’ basketball for a memorable 2021-2022 season.