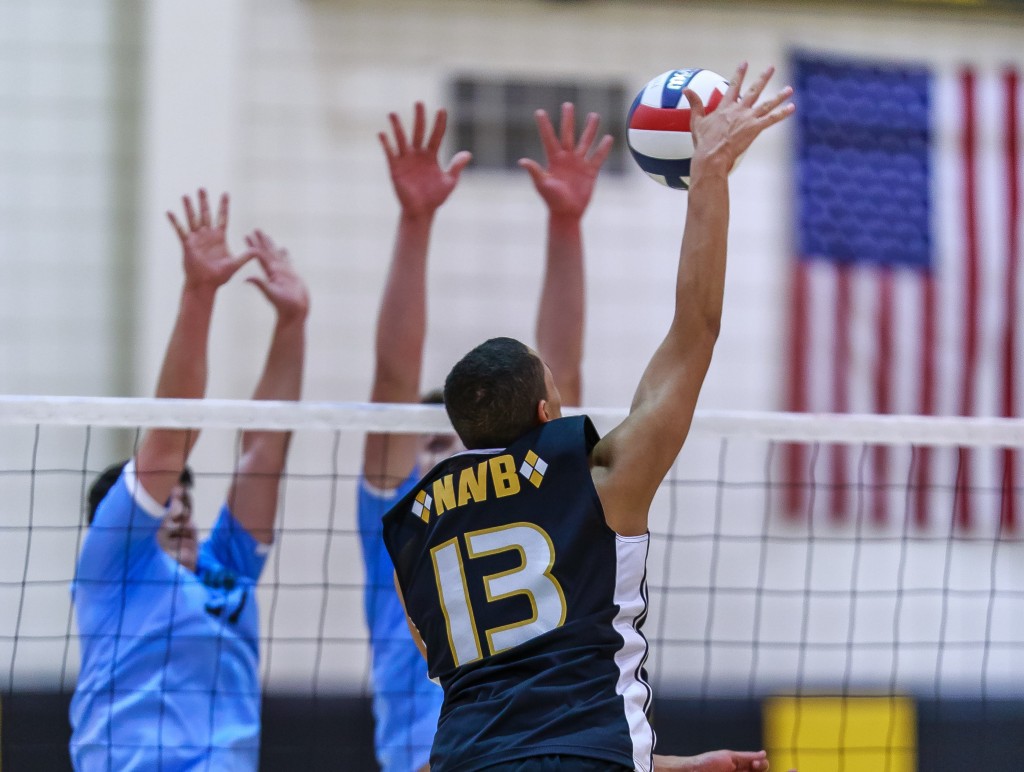 In thrilling come-from behind fashion, the North Allegheny boys’ volleyball team rallied for a 3-2 victory over the Seneca Valley Raiders on Tuesday night. The Tigers trailed 2-1 before forcing a fifth set with a 25-18 win in set four. In the decisive fifth set, the Raiders led 14-13 and were one point away from victory but the Tigers again rallied for an 18-16 set win and a 3-2 section triumph.

Seneca Valley controlled the first set from start to finish behind the play junior Matt Gagnon who tallied four kills in a 25-16 win. Gagnon finished with a game-high 18 kills and was paramount to the Raiders strong play.

North Allegheny asserted itself in set two thanks to the big swings of sophomore Jake Barber and junior Seth Russell. Barber collected four kills in the set and finished with a team-high 11 kills. Russell posted four kills in set two and nine for the evening. Despite the Tigers newfound success, the Raiders took a 23-22 lead late.  Undaunted, the Tigers tied the game thanks to an SV service error and grabbed a 24-23 lead on an ace by Danny Lebovitz, one of three aces on the night for the junior. Another mishit by the Raiders handed NA a 25-23 win in set two.

Set three belonged to Seneca Valley, 25-20, forcing the Tigers to dig deep in set four. Sophomore Canyon Tuman, who collected 10 kills and four blocks on the evening, helped lead the way to a 25-18 win in the fourth set.

The fifth set was tightly played with neither team leading by more than four points at any stage. Leading 14-13, the Raiders seemed poised for victory but NA showed great mettle in batting back for an 18-16 match-clinching win. Junior Eric Visgitis was outstanding in the final set and posted three kills and a match-finishing block. With a total of eight kills and seven blocks for the night, Eric Visgitis was selected as the Wright Automotive Player of the Match.

North Allegheny sits at 1-0 overall and in Section 2-AAA. Seneca Valley is 0-1 overall and in the section. The Tigers will visit the reigning WPIAL champion Fox Chapel Foxes on Thursday night.