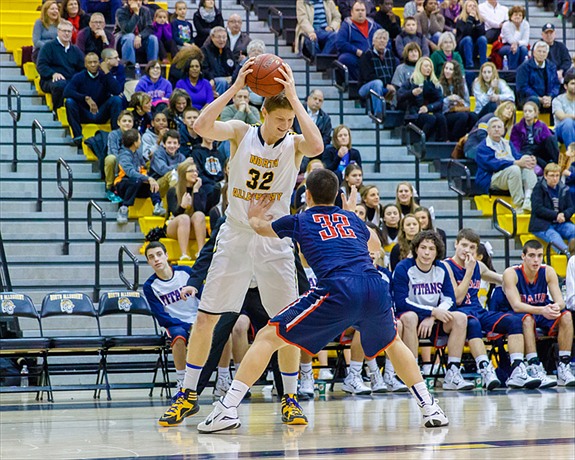 North Allegheny used a solid performance on the offensive glass and a stifling defense to pull away from the Central Catholic Vikings on Tuesday night, 89-63, in a Section 3-AAAA contest. The Tigers grabbed 11 offensive boards and pillaged the Vikings for 16 turnovers to break open a close game in the first half.

Winless in the section entering the game, the Vikings were in desperate need of a win and played that way.  Central Catholic traded punches with the Tigers in the first quarter and took a 24-23 lead early in the second period. The lead was short-lived, however, and the Tigers responded promptly with a 3-pointer by Will Sandherr to take the lead back, 26-24. North Allegheny maintained and expanded the lead from that point on.

A dominant figure in the paint, 6-6 senior Jordan Lake flustered the Vikings on both sides of the ball.  Lake totaled 15 points on the evening by going 7 of 10 from the field, adding six rebounds, three blocks and three steals to his credit.  For his efforts, Lake was named the Wright Automotive Player of the Game.

North Allegheny’s leading scorer was once again senior guard Cole Constantino who tallied 28 points with his outside shooting and slashing drives.  Constantino poured in 5 of 6 shots from beyond the arc and dished out three assists.  Also scoring in double figures were junior Keegan Phillips and sophomore Griffin Sestili, who each posted 11 points.

Central Catholic was paced by junior Bobby Kiernan, who delivered 15 points. The Vikings’ first-half success was spearheaded by senior John Petrishen and junior Bricen Garner, who combined for 17 first-half points.  The duo combined for only one point in the second half.

North Allegheny remains undefeated with the win and improves to 11-0 overall and 4-0 in Section 3-AAAA.  Central Catholic falls to 3-8 overall and 0-5 in the section.  The Tigers host the Seneca Valley Raiders in a big section meeting on Friday night.  The game will be broadcast live via the internet on the North Allegheny Sports Network.  Tip-off is set for 8:00 pm.