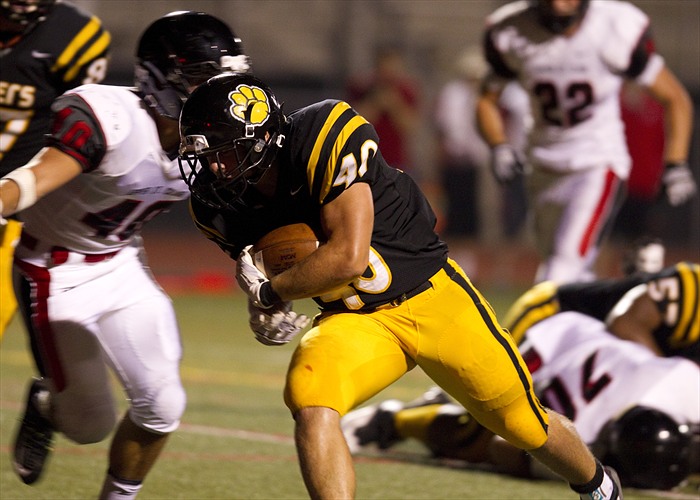 North Allegheny used a ball control offense and racked up over 200 rushing yards to run roughshod over the Upper St. Clair Panthers on Friday night, 31-14, in a non-conference contest at Newman Stadium. The backfield tandem of Michael Pope and Josh Bergman accounted for the vast majority of the damage on the ground.  Pope slashed his way to 96 yards on 11 carries, while Bergman plowed through the Panthers for 73 yards and three touchdowns.  For his efforts, Bergman was named the Wright Automotive Player of the Game.

Along with the running of Pope and Bergman, the Tigers ability to convert on third down was a key component to the win. On the opening possession of the game, North Allegheny converted on two third downs on passes by quarterback Jeff Clemens to Clay Byerly to twice extend a 16-play drive.  The 63-yard march was capped on a 33-yard field goal by Seth Mancuso with 5:05 left in the first quarter to give the Tigers a 3-0 lead.

When the Panthers finally had their hands on the football they didn’t keep it long. On the second play of the ensuing drive the usually efficient Dan Tracano threw an interception to Byerly who returned the pick for a 34-yard touchdown and a 10-0 NA lead with 4:06 remaining in the quarter.

Upper St. Clair’s second possession was much more productive thanks to the running of Thomas Vissman. On a 2nd and 13 from the USC 25 yard line, the sophomore tailback burst for a 71-yard run to the NA 4-yard line.  Two plays later, Vissman scored on a 1-yard run to trim the score to 10-7, Tigers, with 1:58 to go in the opening stanza.

Despite the Panthers score, the Tigers returned to their ball control offense and used another lengthy drive to add on to their lead. North Allegheny drove 80-yards on an 18-play drive, punctuating the march with 5:34 remaining in the second quarter on an 8-yard touchdown run by Bergman.  After a Vissman fumble was recovered by Eric Sprys at the USC 45-yard line on the ensuing possession, the Tigers tacked on another rushing touchdown by Bergman to take a 24-7 lead into halftime.

The trend of NA ball control continued in the second half as USC went three and out on its first possession and the Tigers drove 68 yards on 14 plays in a seven-minute drive that concluded on a 1-yard plunge by Bergman for a 31-7 advantage. Upper St. Clair capped the scoring in the fourth quarter with a 16-yard touchdown reception by Marcus Galie from Trocano to bring the final to 31-14, Tigers.

North Allegheny was successful on 9 of 14 third conversions and was a perfect 3 for 3 on fourth down. The Tigers defense forced three turnovers to further limit Upper St. Clair’s time of possession.

With the win, North Allegheny improves to 2-2 overall while Upper St. Clair falls to 1-3. The Tigers host Shaler next week in a Northern Eight Conference affair.